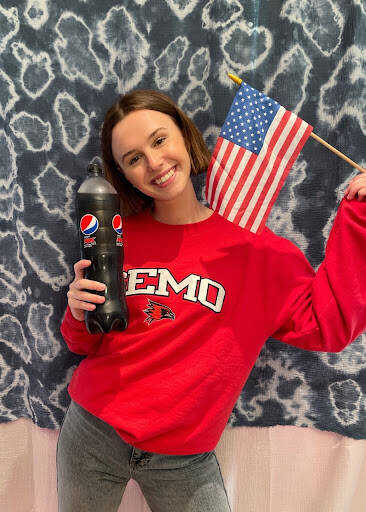 Kika Rooselaer poses with a Pepsi bottle in her SEMO sweatshirt. Rooselaer worked from home, but still held America and her SEMO friends close to her heart during her time at PepsiCo Europe.
Submitted by Kika Rooselaer

Southeast Graduate Assistant and international student from Belgium, Kika Rooselaer, had the opportunity to design visuals for a PepsiCo campaign that raised $300,000 in donations to help restore Europe after the floods. This past spring, Rooselaer worked as an intern in corporate communications for PepsiCo Europe, and her experience there left quite the impression on both her and the communities she worked with.

“The work ethic in Europe is very different from America,” Rooselaer said. “It was like a tight-knit family, and they completely pulled you in as if you’re a full-time employee. You can tell they care a lot about their interns.”

PepsiCo Europe’s mission is to provide a positive working environment for interns to help them excel in whatever they strive to do. The PepsiCo Global Foundations website states, “This company is built on individual excellence and personal responsibility, but no one can achieve our goals by acting alone. We need exceptional people who are also able to work together, whether in structured teams or in informal collaboration.” Rooselaer found herself feeling at home with the PepsiCo crew and never felt alone through her journey, despite a few setbacks from the pandemic.

“Due to the pandemic, we didn’t get to go to the office, but at the same time, there was still this togetherness,” Rooselaer said. “If I were to go to the office, I would have only been able to meet the Belgian interns, but by meeting through Zoom and working from home, we were also able to work with the Dutch interns, as well.”

PepsiCo’s website states they strive to make an impact on the community through charity work and sustainability projects; Rooselaer’s greatest achievement during her time working for PepsiCo was being able to work for something bigger than herself and the company.

“I think the coolest project I was able to work on because it made such a big impact on my life was working for the people and communities that were affected by the massive flooding that happened throughout Europe back in July,” Rooselaer said.

Rooselaer had the opportunity to make some of the visuals for the PepsiCo campaign that raised $300,000 in donations to help restore Europe after the floods.

Rooselaer felt this internship helped shape her future and set a solid foundation for what she wants to do in the future.

“I think this internship definitely foreshadows what I want to do as a career,” she said. “I always thought that I would end up in the marketing department, but I realized that corporate communications is kind of the same, but so different. It was cool to be working behind the scenes and not so much in the spotlight. I was able to see how PepsiCo actually makes a difference and doesn’t just sell bags of chips. I can really see myself doing something like that, especially in a big corporation landscape as opposed to smaller organizations.”

Rooselear feels hopeful for the future and plans to continue pursuing her career path after her time here at SEMO.

“Once I like something, I don't mind overcoming obstacles for it. I learned a lot, but I never saw it as a struggle. It was an eye opener to see how big companies like that actually work in reality and put everything into play,” Rooselaer said. “The way I work, I see opportunities, I take them, and I try to make the best of it. And it’s been working for a couple years now. I just like where things are going.”