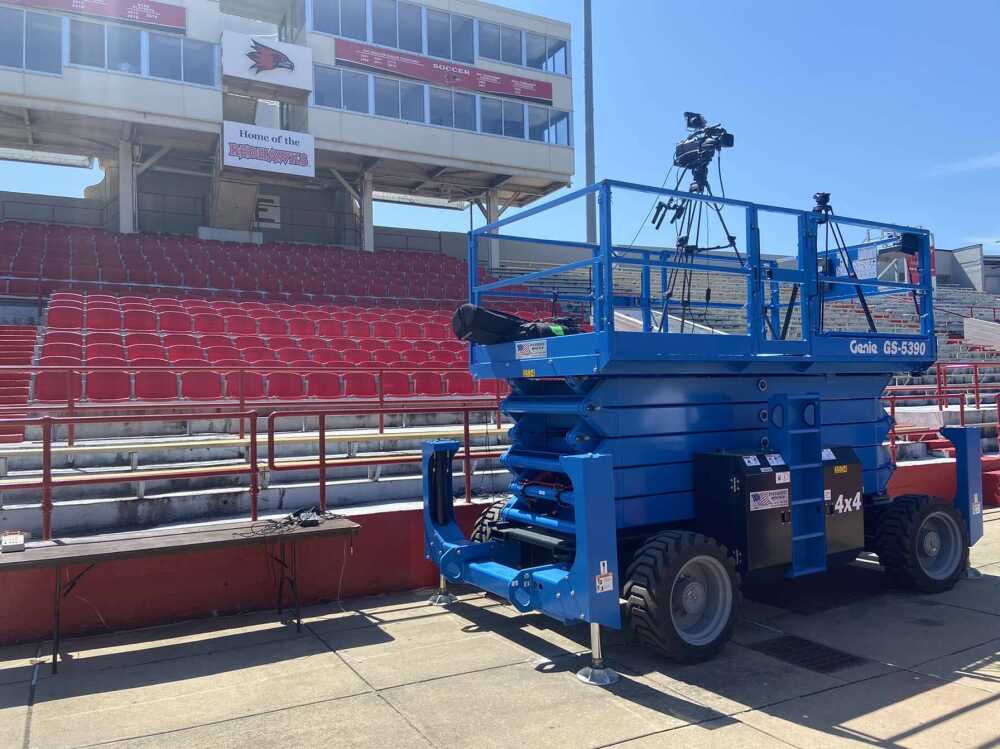 One of the cameras used by the ESPN+ crew sits on a lift that was brought into Houck Stadium to assist with production of football and soccer.
Photo by Owen Korando

Southeast’s football and soccer teams have shared plenty of ups and downs during their 91-year span inside of Houck Stadium, where fans have gathered together to cheer on the Redhawks for years. And for those who couldn’t make it to the games, the staff at ESPN+ have been there to share the live coverage of games since the Ohio Valley Conference (OVC) made a deal with ESPN+ in 2018.

With the south section of Houck Stadium deteriorating and becoming a safety concern, the staff at ESPN+ are not able to film in their original spots. The ESPN+ crew have begun to adapt to new ways of creating shots of the game for those who are watching at home.

Owen Korando, a second year crewmember at ESPN+, sees the challenges filming in new locations present. After using only one in-air camera — a high-end zone camera that stood 50 feet in the air — Korando and the crew must now adjust to the changes being made.

“With the whole side being closed, we lose the opportunity to put four of our cameras, which are normally staged on platforms on top of the stadium,” Korando said. “We have to put those cameras now in the air which means a lot more work for us, and we have to run more cords or cables just to be able to have connection in the air.”

Associate producer Jeff Cox said the crew has had to bring in lifts to set the cameras on, along with running new cables. In a task that normally takes a couple of hours to complete, Cox said setup for the first football game on Sept. 2 took almost half a day to set up.

Although the filming situation is not ideal for the crew, Cox mentioned their head producer Anthony Scherer wants them to continue to come out and produce the best content they can for those watching.

“He doesn’t want them to come in and think that they can give half of their effort just because everything’s more difficult,” Cox said. “He still wants to go in and do our best every single time.”

With the ESPN+ staff facing challenges, Scherer said this is not an excuse to execute “mediocre” work. Even though the staff consists of mostly students, Scherer sees them executing their work better as they become comfortable using cameras and getting shots.

With the fans at home also adapting to the new changes ESPN+ is producing, Scherer hopes the enjoyment of watching the game from one’s home is still there.

“I hope the fans are getting enjoyment,” Scherer said. “But I hope the people who watch it will appreciate the hard work that these students are putting into it because, again, it is almost all students that are handling all these parts to it.”