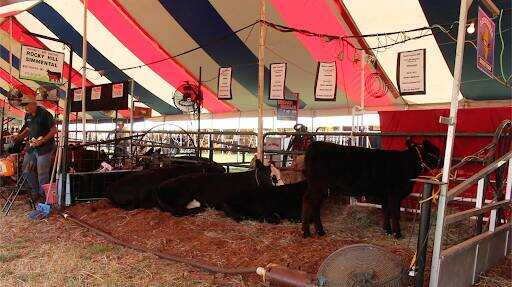 Members of the 4-H Club brought their livestock to the annual SEMO District Fair to show in competition Sept. 15. Cattle, swine, sheep and goats were among the classes presented for judging.
Photo by Kailyn Veach

Frozen lemonade, funnel cakes and flashy rides — these are staples of the SEMO District Fair, and a thought at the forefront of most children’s minds come September. But for the children of the 4-H Club, the fair means cows, sheep and mud … lots of mud. The 4-H Club’s annual livestock competitions and auctions offer fairgoers a change of scenery and draw in competitors and spectators from across the Southeast region.

According to their website, the 4-H Club is a nonprofit focused on teaching kids about health, science, agriculture and civic engagement. The club welcomes members as young as five years of age, through their Clover Kids program.

Clover Kids members engage in a variety of activities, including communication skills practice, self-confidence support and animal science, designed to prepare and empower them for their futures.

Five-year-old Clover Kids member Kara Meyer said her favorite part of being involved in the program is getting to come to the fair. This year, she brought her heifer, Bo, and said for now, she only raises cows.

At age eight, members move out of the Clover Kids program and become eligible to compete in 4-H competitions and livestock auctions. At auction, members' animals are judged on their potential for breeding or as a market animal.

“I’ve won a lot of different shows. My steer’s been doing really good the past few years,” Meyer said. “This year, I placed fifth in my class at the national level. I haven’t shown my heifer here yet, and my steer won his class.”

In addition to the 4-H Club members, the SEMO District Fair gives those outside the club the opportunity to show their animals in the open class. Open class includes a variety of animals like poultry, rabbits, guinea pigs and more.

Poultry Tent superintendent Matt Simmons showed animals in the open class as a child and compared his childhood joys to those he experiences now.

“Probably younger me was winning [my] first medals, and now that I help out with it, it’s when the kids get their first ribbons,” Simmons said of his favorite part of working in the tent.

For more information about the 4-H Club, visit their website.