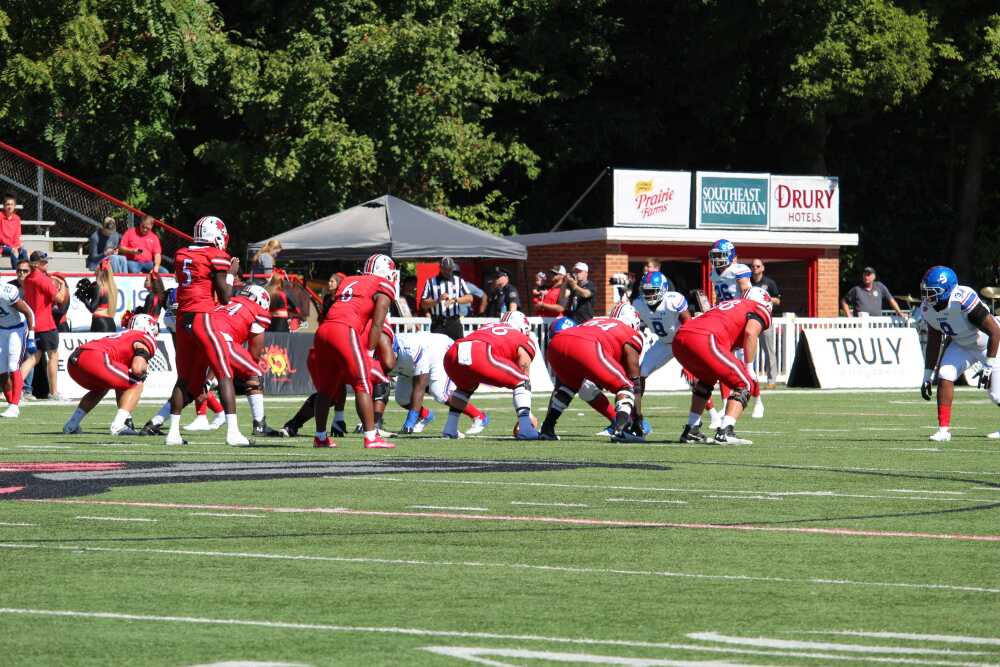 Junior quarterback CJ Ogbonna prepares to take the snap with senior running back Geno Hess to his right during Southeast's 47-14 win over Tennessee State on Sept. 25 at Houck Stadium in Cape Girardeau. Hess posted 205 rushing yards and three touchdowns for the Redhawks in the win.
Photo by Kailyn Veach

A big day from Redhawks senior running back Geno Hess proved to be enough as the Redhawks defeated the Tennessee State Tigers 47-14 at Houck Stadium in Cape Girardeau on Sept. 25.

Hess carried the ball 25 times for 205 yards and three touchdowns. He also caught one pass for 27 yards.

“He had good vision and then when he hit it, he hit it, and [he] was great,” Matukewicz said.

Hess said the tough three game stretch to open the season for the Redhawks helped prepare them for the Ohio Valley Conference opener against Tennessee State.

“We didn’t get the outcome we wanted [but] we saw that we can play with those teams,” Hess said.

Hess said he is hopeful the win to open OVC play will be a spark that gets the team rolling the rest of the season.

The Redhawks would open the scoring with just under 10 minutes to play in the first quarter when graduate student kicker Kenny Doak knocked down a 33-yard field goal to give the Redhawks a 3-0 lead.

Matukewicz said he knew coming in they needed to get the kicking game going.

“Kenny was struggling and he finally earned his postgame meal [because] we about blew his leg off today with the kickoffs and all the field goals,” Matukewicz said.

Southeast held Tennessee State to just 14 yards rushing and nine of those yards came in the second half.

Matukewicz said when preparing for the matchup, focusing on stopping the run was a priority.

“It was the main focus,” Matukewicz said. “They have a really good back. He was a freshman OVC Player of the Year last year [and they have] a good offensive line. So those guys did a great job.”

Southeast junior quarterback CJ Ogbonna completed 14-of-23 passes for 227 yards and one touchdown.

Southeast would take a 16-0 lead into halftime and Hess would begin the second half in a big way when he broke off a 63-yard touchdown run just under two minutes into the third quarter.

The final score of the game for the Redhawks came with under seven minutes left in regulation when Ogbonna hooked up with senior tight end Will Weidemann for a six yard touchdown pass that pushed the lead to 47-14.

Southeast will be back in action on Oct. 2 when they travel to Cookeville, Tennessee to take on the Tennessee Tech Golden Eagles at 1:30 p.m.