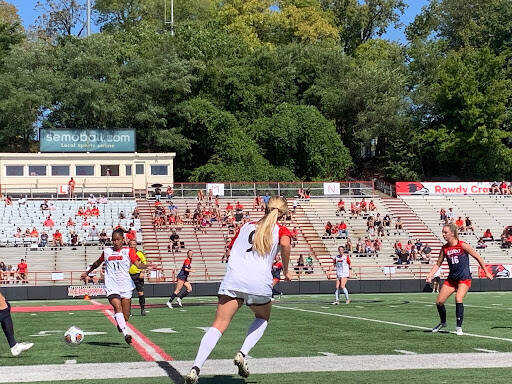 Sunday afternoon’s SEMO Women’s soccer game saw two closely matched defensive teams go head-to-head with Belmont University coming out on top 1-0 in double overtime. This was the first Ohio Valley Conference match of the year for the Redhawks. It was a tale of two halves with Southeast having more opportunities to score in the first half, and the Bruins having more chances in the second half and both overtime periods.

SEMO Head Coach Heather Nelson said although this was not the result she wanted, the team was able to create good scoring chances.

“We’ll build off the attacking we generated, especially from Millie [Katelyn Miller] up top,” Nelson said. “Morgan [McCourt] created a great shot that their goalkeeper managed to save.”

The Bruins flipped the script in the second half, putting up three shots on goal compared to Southeast’s two. All of the scoring opportunities were saved by Leitner and Redden respectively and the game was forced into overtime.

Redden said she had to stay sharp because of the good scoring opportunities Belmont was able to create.

“You know the game of soccer, it goes in waves and throughout the game there’s ups and downs,” Redden said. “So, I knew I had to be there for my team in those down parts.”

Overtime in NCAA soccer consists of two ten-minute periods with the first goal winning the game, if the score is still tied at the end of both periods it goes down as a draw. The first overtime period belonged to Belmont again with the Bruins having one shot on goal to SEMO’s zero.

Redden managed to stay in front of the ball to keep the game alive for the Redhawks, but in the second overtime period Belmont sophomore forward/midfielder Maci Pekmezian notched the proverbial “Golden Goal” and walked away with the victory.

Pekmezian said while goals are exciting there is just something special about scoring a game winner.

“I was pretty relaxed when I saw they were closing in on Summer [Curtis] and then I saw that I was wide open,” Pekmezian said. “She passed it off to me so I just took a touch on it and put it in.”

The Redhawks take the pitch again this Thursday, Sept. 30 at 3 p.m. when they go toe-to-toe with the Racers from Murray State University in Murray, Kentucky.