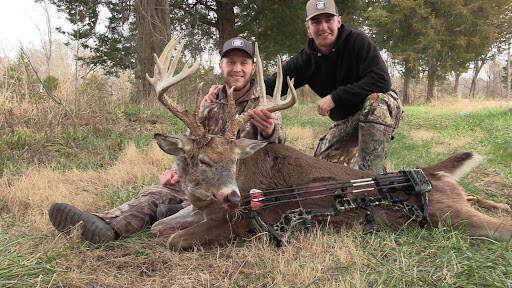 Mason Westerman (left) poses for a picture with Ethen Eggemeyer after successfully harvesting a 15-point buck on Nov. 28, 2020.
Photo submitted by Mason Westerman

With the Missouri archery season already open and the Illinois season set to open Oct. 1, SEMO student and avid hunter Mason Westerman began his preparation for the season in March.

Westerman is a senior majoring in wildlife conservation with a minor in soils and geoscience. He started hunting when he was approximately nine years old, but he did not harvest his first deer until age 11.

For Westerman, preparation begins in the spring. This includes shed hunting and planting spring food plots. Shed hunting allows hunters to see what deer are sticking around late in the season. Spring food plots are planted in correlation with farmers planting their agriculture fields, so the crops come in at around the same time.

Plants like clover, alfalfa and chicory can commonly be found in spring food plots, while during the summer months, plants like corn and soybeans are a popular choice. During the winter, it is common to see things like beets, radishes and turnips planted. This provides deer with a source of food during the harsh winter months after everything has died off. 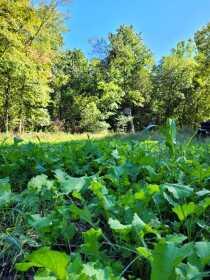 “It's pretty important right now, because as farmers are getting out crops, those deer are starting to shift their patterns to more food available spots, and those are more isolated,” Westerman said.

Westerman said he would not be able to do this without the help of his good friend Ethen Eggemeyer. The two have been hunting together since 2019 and love to bounce ideas off of each other. Westerman said the importance of having a close group of friends is crucial when it comes to being a successful hunter.

“I would say it's almost a must, because I have my ideas and I get set in my ways, but not all my ideas are correct,” Westerman said. “I like getting input from other people because they have a different background than I do, so it helps create an idea and an end result that's way better than what I can possibly dream of.”

Likewise, Eggemeyer thinks having a good group of friends can help contribute to being a successful hunter.

“I mean, we send trail cam pictures back to each other, get opinions on deer, whether we should pass them, shoot them [and] where we should hunt,” Eggemeyer said. “It goes down to even what broadheads we prefer and stuff like that. It definitely plays a huge role having a group like that, that's passionate.”

Trail cameras also play a part when it comes to preparing for the season. They allow hunters to see what deer have survived the winter, when they are moving and where they are hanging out. These cameras capture pictures and save them onto a SD card. In order to see what pictures have been captured, the hunter must travel to each camera, remove the card, and view the photos on their phone or computer.

With advancements in technology, the pair of friends have started to switch to the use of cellular trail cameras. These cameras are extremely useful, as they send photos and videos straight to cell phones, cutting out the extra work.

“Now, with both of us starting to use cell cams a lot more, we think it really helps any hunter,” Eggemeyer said. “Really hunt smarter and not harder, so to speak — you're not always in there checking on cameras, pulling chips and stuff out of your cameras in the summer months and bumping the deer around when you're in there. It lets you stay out of their area more, while still seeing what's in there.”

Periodically, both Westerman and Eggemeyer record their hunts. This is mainly for their own enjoyment and can help them determine shot placement on the animal. It allows them to give the animal the proper amount of time so they do not stress them out and are able to recover it.

With recording a hunt comes many challenges. Having one person to record while the other hunts is the easiest way to tackle this challenge. Most of the time, the cameras are off, which creates a lot of downtime while hunting. When it comes to self-filming a hunt, things are much different.

“I make sure to get all my stuff ready beforehand and then go out to the tree, get it all set up real early and then have everything kind of set up to where you think they're going to come out,” Westerman said. “You know, have everything ready, and then some people have it to where you can do most of your cameras remotely. So, you can just press a button, they all turn on, and you can kind of do it manually that way.”

Westerman is trying to build off of last year, when he harvested a nine-point buck on Nov. 23 that scored in the 140s. Just six short days later on Nov. 28, he was able to top this by harvesting a 15-point buck that scored in the 170s. The average score for a Illinois white-tail buck ranges anywhere from 130-140 inches. This score is calculated by the sum of antler lengths, point lengths, circumferences and inside spread. These are measured in inches to the closest ⅛ inch. This may be hard to top for him, but he is looking to have another successful season this fall.