SEMO District Fair is full of food and fun for everyone 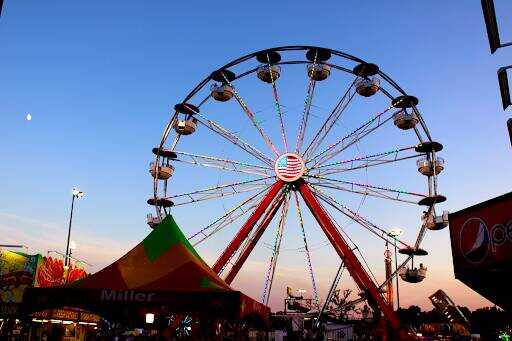 The iconic SEMO District Fair Ferris Wheel lights up the evening at Arena Park Sept. 15. Fair attendees enjoy the end of summer sunset as they wait in line for the rides.
Photo by Olivia Tock

The smell of warm funnel cakes and juicy turkey legs filled the air as the SEMO District Fair took over the town this past week. People from across the region and even the world come to Cape Girardeau to enjoy an entire week of live music, agricultural activities, carnival rides and fair food.

From Sept. 11 through Sept. 18, the SEMO District Fair hosted countless events at Arena Park starting with the annual fair parade, which commemorated the lives lost in the 9/11 terrorist attack on the 20th anniversary of the attack.

Throughout the week, fairgoers participated in cornhole tournaments, 4-H agriculture competitions, Miss SEMO pageants and various contests at the park. Several bands and vocalists, including Zach Williams, Frank Foster, and Whiskey Myers, performed live on the grandstand stage and at the main entrance. There were also booths promoting local businesses lined up along the main walkway.

The events were not the only draw of the SEMO District Fair. The rides and games provided fun for people of all ages. Azooz Salamah is a recent SEMO graduate who has attended the fair every year since he moved to Cape Girardeau from Saudi Arabia in 2015.

“I like to start with playing the games first,” Salamah said. “Then I go to the food. The pink lemonade is really nice.”

Due to the COVID-19 pandemic, the fair was canceled in 2020. With everything up and running again this year and pleasant weather throughout the week, the mood of the fair was bursting with excitement.

“It's really nice to come here; it's really fun,” Salamah said. “The atmosphere is really nice, and especially after everything we’ve been through, it's nice to see so many people around.”

The SEMO District Fair is nothing without carnival food, which was one of the main reasons many people from different places gathered at this event. Elementary education major Tori Kopff said although she has attended smaller fairs at her home in St. Louis, this was her first time attending the SEMO District Fair.

“Definitely the food — I’ve heard it’s phenomenal. And I heard people only come for the food.”

Kopff said the foods she was most excited for were the funnel cakes and kettle corn.

Elementary education major Sophia Heaman was also a first-time attendee from the St. Louis area, and said she heard lots of great things about the fair that made her want to check it out.

“There’s a lot of good food — I’ve heard good things about the corndogs and the funnel cake and that there’s some fun rides,” she said.

If you missed out on this fun week at the SEMO District Fair, visit their website for details on next year’s event.