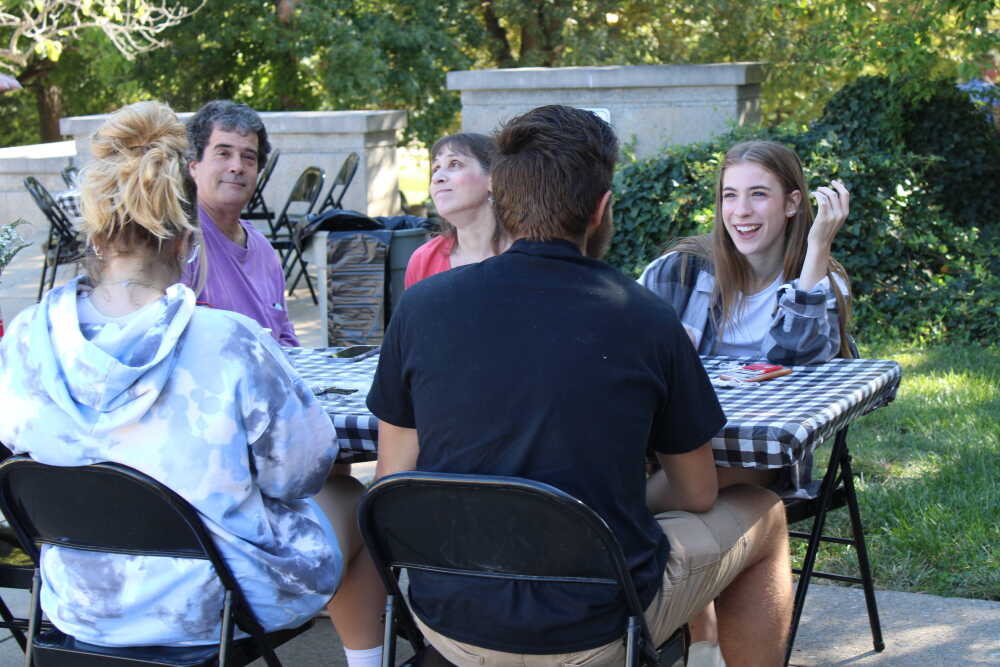 A family enjoys their time together during family weekend. Breakfast with the president was held on Sept. 25 with donuts, casserole and fruit.
Photo by Alyssa Lunsford

From young to old, college-aged to middle-aged, many people can agree music is a way to bring new light to past traditions.

This was the case for Family Weekend at Southeast Missouri State University, which had planned events on Saturday, September 25th. Events were in full-swing with activities located on many parts of campus, including at the University Center, River Campus, Kent Library and Houck Stadium.

Activities ranged from eating together with family, creating crafts, playing games and watching football, but two new additions to the weekend added a musical touch.

Director of Campus Life and Event Services Michelle Irby was the main organizer for this event. For many first-year students, it was a chance to reconnect with family and show them their daily lives on campus.

“Family Weekend is an opportunity for students to invite family to come be with us and experience Southeast and be a part of our Redhawk spirit,” Irby said.

She stated two new, musical-based events were added to mix up the events traditionally offered throughout the weekend.

The first new event was Boom Boom Bingo, a large game of family bingo, at which a DJ played loud music. The event was located in the ballroom of the University Center, and families competed against one another for prizes.

The second event was a concert by Logan Chapman, a Cape Girardeau singer, located near the back of the River Campus. It took place from 7 to 9 p.m. on Saturday. String lights lit up a small stage, and a small crowd pooled around the front.

“We haven’t tried to intentionally encourage people to go to the River Campus, so we decided to bring a performer,” Irby said.

While the new events were open to all, many of the traditional events garnered large crowds, as well.

The first event of the morning, breakfast with SEMO President Carlos Vargas, took place outside of the Kent Library. Families enjoyed a small buffet of doughnuts, fruits and casserole while gathered at the tables on Kent Library Portico.

One family in particular said they thoroughly enjoyed the breakfast with their senior student, Cody Bunger. Cody’s mother, Kim Sahlfeld-Bunger, said she was glad to be able to continue the tradition of visiting her son on Family Weekend for the third year in a row.

“Your family is important no matter what,” Sahlfeld-Bunger said. “You’re here to learn and grow, but your family is where you started.”

For those interested in SEMO sports, the tailgate and football game were the place to be. Filled with music and food, the tailgate allowed families to come together and liven their Redhawk spirits before the game.

SEMO played Tennessee State in the football game and won, 47-14.

Some families, however, were mainly interested in interacting with their children for the first time since the semester began.

The Rysaneks visited their son TJ Rysanek, who had just recently moved to SEMO for his first semester of school. His recently-graduated sister Rachel Rysanek said she feels Family Weekend positively impacts students.

“After a month of a student getting acclimated to the campus, people start to feel lonely, and they start to forget they aren’t alone, so having your parents and family come down and remind them that they are still here for them is helpful,” Rachel said.

Some even came to Family Weekend to celebrate old traditions, like Macie Hogenmiller’s family. Although this is her first year at SEMO, her mother, Kelly Hogenmiller, is a SEMO alumna.

“My mom was super excited to complete the experience of signing her name in the Academic Dome, as she never got to when she was a student here,” Macie said. “I got to do it at Camp Redhawk, and it made me feel like an official part of the SEMO community.”

For more information about this year's Family Weekend, visit their website.