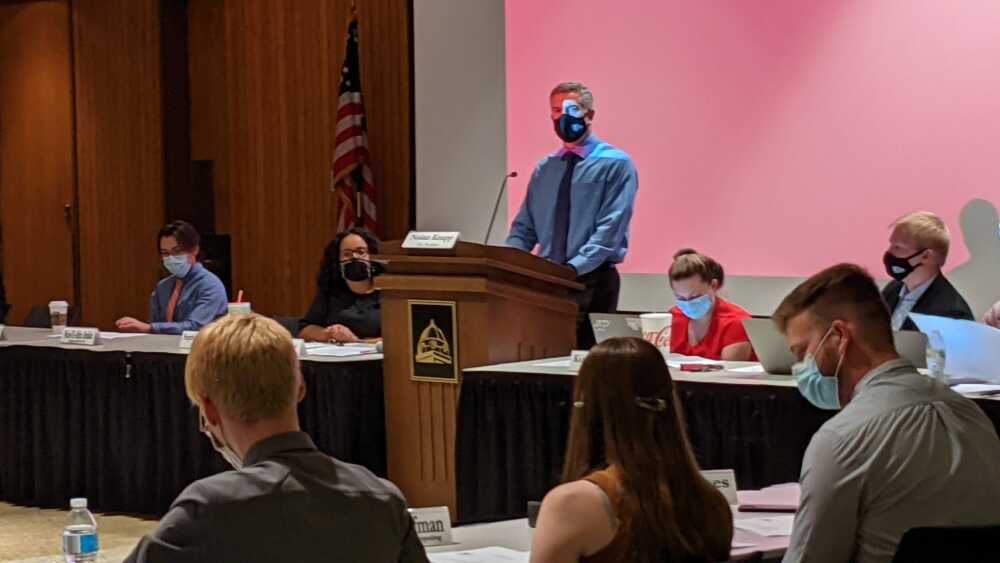 Correction: Southeast's Senate voted to cover the cost of registration for the medical conference at about $345 at the Sept. 27 meeting. When reported, the story stated the decision remained undecided.

The meeting included faculty guest speakers, reports on committee events and votes on future fundraisers. The main topic of the night was a decision to allocate an estimated $4,000 for two students to attend a medical conference in Orlando, Fla.

SGA Secretary Kate Appleman took the stand Monday night to propose a budget for her and her research partner to attend the conference as podium speakers at the undergraduate level.

“This [conference] is in front of all PhDs, graduates and everyone who is invested in research. We are a select few of students to have ever been selected for a podium position at the undergraduate level,” Appleman said.

This proposal was not without its concerns. SGA President Layla Bouzihay began the conversation by speaking on the budget the student government would use to decide this action.

Speaking directly to the Senate, Bouzihay said, “$4,000 is being proposed for two students, and that is 18% of the whole budget [for the year].”

Appleman then provided a budget breakdown, stating where and how the money would be allocated. Each individual would require an estimated $2,000, with major fees including the entry fee, the plane fee and the hotel stay, the latter of which was one of the larger points of concern.

Researching the area around the convention center, Appleman said her findings found hotels alone would cost $200 per night, making for a total of $1,000 for the entire stay of the conference.

The decision is still undecided; no formal decision was made by the end of the first half of the open session.

The meeting was not solely dedicated to committee vote. The meeting began as a faculty-to-student conversation. Headed by faculty members from different departments, each employee gave a report of their side of management.

Director of Athletics Brady Barke presented upcoming information on Houck Stadium and the remodel. After the south grandstand was closed on Sept. 1st, reducing seating capacity from 8,000 to 3,300, they are happy to announce Phase 1 has been green lit for construction.

“We are looking to get back and see how many of the [8,000] seats we can get back, then begin a major push for fundraising,” Barke said.

Barke said the planned changes to Houck Stadium will be available for students to see online, to get an idea of what Houck will look like.

Student Government meets every Monday in the UC Ballroom and is open to anyone who wishes to attend. For more information, visit the Southeast Arrow Facebook page for live coverage and other updates.