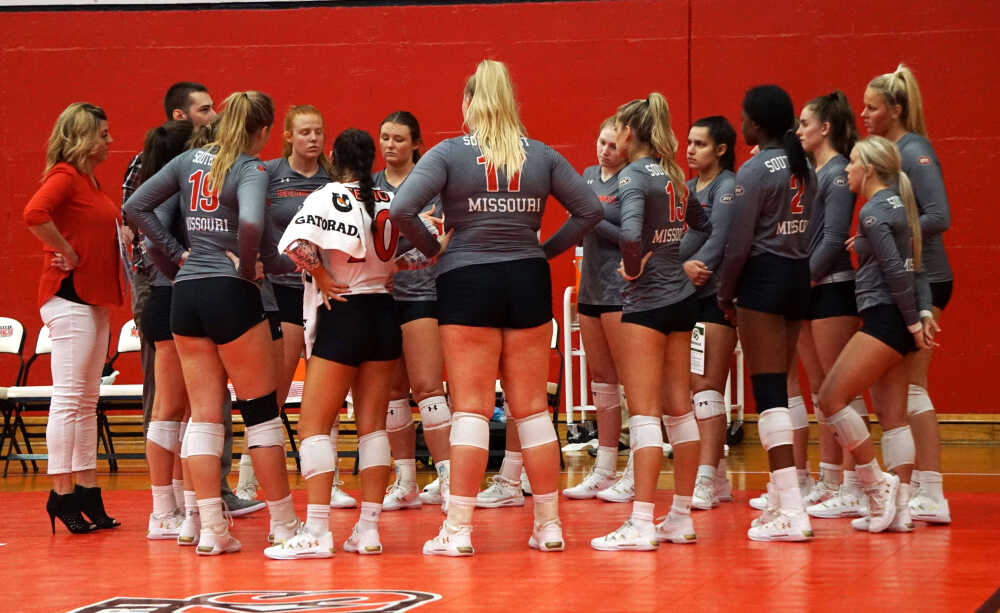 SEMO’s Volleyball team talks with Head Coach, Julie Yankus and Assistant Coach, Matt Stolz about strategies for the game during their five set loss to UT Martin on Sept. 29 at Houck Field House in Cape Girardeau.
Photo by Hannah Wolfe

SEMO volleyball swept Belmont 3-0 both Friday, Oct. 1 and Sat, Oct 2 in their back-to-back games at Houck Field House this weekend.

After back-to-back OVC conference losses to Tennessee State and UT Martin, head coach, Julie Yankus and the Redhawks made sure they redeemed themselves this weekend.

“That match with UT Martin we had 70 kills, which is really good, but we had 40 hitting errors,” Yankus said. “[So] how many points we gave up was astronomical and that contributed to that.”

Minimizing errors was the biggest focus for the team as they went into these matches against Belmont.

The first matchup on Friday was a battle between the teams. The final score of the first set was 25-20, and the second and third sets were both 25-19. The Redhawks led the Bruins in just about every stat, with 54 kills to the Bruins’ 35, and 50 digs to their 46.

Senior outside hitter, Laney Molloy, led the way with 18 of those 54 kills to go along with 5 digs.

“Last week we kind of felt like we beat ourselves. So during the practices we just focused on making less unforced errors,” Molloy said.

Senior setter Claire Ochs finished with 28 assists and 11 digs in the victory.

Coach Yankus said the basics of volleyball are what guided her team to these two wins. After realizing that Belmont couldn’t contain their skill and strategy, the Redhawks took it and ran with it.

“We start very aggressive and they really struggled to get the system,” Yankus said. “So when we forced them to be one dimensional and only have one hitter, we knew how to defend that one and we set our block up over there so that was really the key to the success of these last two matches.”

These two wins moved the Redhawks to 12-5 overall, and 3-2 in conference play.

Southeast will be back in action Oct. 8 and 9 on a trip to Charleston, Illinois in a matchup against the Eastern Illinois Panthers at 6 p.m. and 4 p.m.