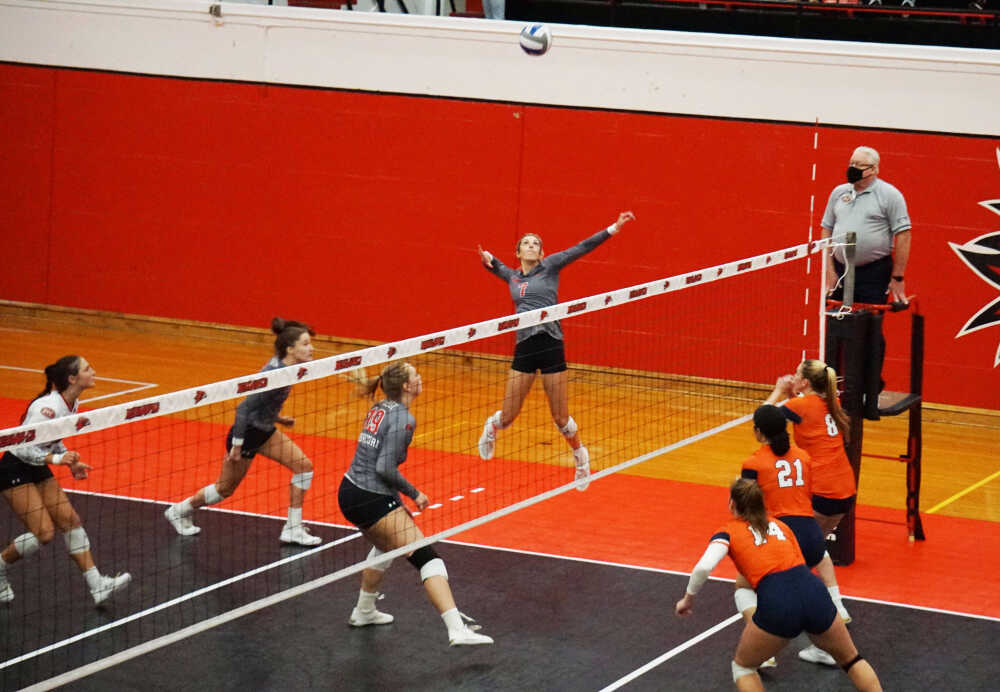 Senior outside hitter Laney Malloy goes up for a kill during Southeast's five set loss to UT Martin on Sept. 29 at Houck Field House in Cape Girardeau.
Photo by Hannah Wolfe

The Redhawks started off neck and neck with the Skyhawks in the first set.

SEMO coach Julie Yankus burned her timeouts in the first and second sets as the Skyhawks were on a run in an attempt to swing the momentum.

“We came out really slow tonight and unfortunately put ourselves in a bad situation where we are trying to reverse sweep a team,” Yankus said.

The Redhawks went down 2-0 in the first two sets. The first set was 23-25, and the second set was 20-25. It took a pep talk in the locker room from the coach and captains for the team to come back out ready to play.

Captains Laney Malloy and Claire Ochs didn’t give up hope when the team went down 2-0 in the first two sets.

“We needed a little break to refocus because we weren’t really playing SEMO volleyball,” captain Laney Malloy said. “I think those breaks between the second and third set is nice for you to actually take a step back and get back to playing how we normally play.”

Ochs, the primary setter for the Redhawks, encourages her team whether they’re winning or losing.

“We’ve been at the top of our conference the past two years, so a lot of teams are coming for us, and it showed in those first two sets. Luckily, we pulled it together for the third and fourth set,” co-captain Claire Ochs said.

There were four crucial players who stood out during this intense game.

Southeast junior Colby Greene was one of the key players who kept her team in the game with a career high of 23 kills.

“I’m really proud of how after a bad weekend for Colby personally, how she responded and came back tonight,” Yankus said. “She likes to hit the ball pretty hard, and when that wasn’t working, she adjusted and found other ways to score.”

The Redhawks took advantage of UT Martin’s mistakes in the third set and carried that momentum into the fourth set.

The third and fourth sets went in the Redhawks’ favor. In both sets, there were a lot of ties, but the Redhawks pulled away.

“I’m proud of how we played in the third and fourth set. We finally started playing SEMO volleyball as a team,” Malloy said.

“We just have to get into the gym tomorrow ready to face Belmont this weekend,” Ochs said.

In the fifth set, Redhawks were winning 12-8, but UT Martin went on a run. Final score of the fifth set was 13-15 in favor of UT Martin.

The Redhawks record is now 1-2 in conference play.

The next home game is this Friday, when the Redhawks face Belmont at 6 p.m. at Houck Field House.