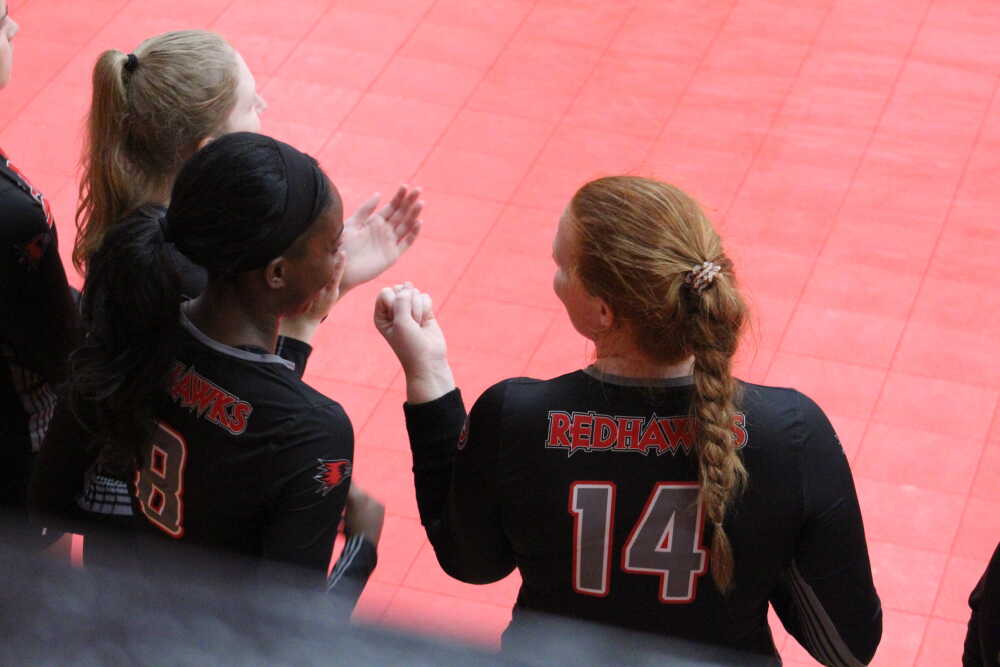 Talia Gouard (middle) stands with her teammates during a match at Houck Fieldhouse in Cape Girardeau.
Photo by Anna Hays

Not playing much during her freshman year at SEMO, junior middle blocker Talia Gouard has stepped up to make an impact on Redhawks volleyball.

In her first season, Gouard competed in 33 sets throughout 14 matches, starting in four of them. She saw a major increase in her sophomore season as she started all 17 matches and played in all 59 sets. In the 2021 season, with Ohio Valley Conference play kicking off two weeks ago, Gouard has competed in and started in 17 of 18 matches.

Coming into the 2021 season, Gouard says she knew she had “some big shoes to fill” with Southeast alumni Maggie Adams’ graduation. In the midst of the pressure, Gouard’s confidence remained high.

“I knew this would be my chance to step up,” Gouard said. “I took it into my own hands in taking this position and making it mine.”

Even though Gouard says Redhawks coach Julie Yankus did not inform her on how this season was going to look, Yankus said she had a plan all along.

“The plan for Talia was to make sure we could get her involved as much as we can,” Yankus said. “We knew she would be one of our top middles and just one of the top returners that has the most experience in her position, so we wanted to find a way to get her the ball quick and find her ways to score.”

Yankus said Gouard’s ability to block and read the game was another reason she planned on playing Gouard a lot more.

On the season, Gouard currently has a total of 92 kills, which is fourth best on the team, hitting at 25.8%. She also leads Southeast in total blocks with 48.

According to Yankus, much of Gouard’s success this season has come from her progression throughout the years; Yankus says she has grown exponentially.

“What was great about her freshman year is she did have some opportunities earlier in the year and did well when she had them,” Yankus said. “I think the biggest thing she has learned, though, is what we as coaches expect from her as far as understanding blocking and requirements during blocking schemes.”

“She really has developed a lot as a player, gotten a lot of confidence as the years have gone on, and always comes into practice with a good attitude, ready to work,” Ochs said. “Her work ethic has made her a good middle blocker and teammate. It’s been really awesome to have her step into the middle position and get the job done.”

As far as this season compared to her other seasons, Gouard says she really has come a long way.

“I played well last year, but I feel like this year has been a lot better for me,” Gouard said. “I’m hoping to keep excelling in that way.”

You can see Gouard in action again this Friday, Oct. 8, as she and Redhawks volleyball travel to Charleston, Ill., to take on Eastern Illinois in a two-game series.