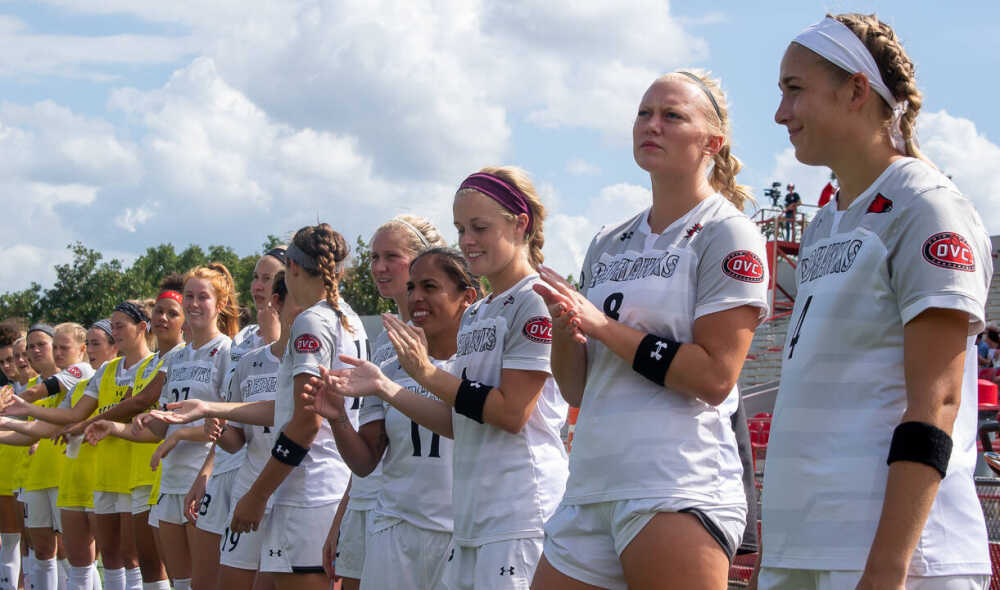 Abby Tremain (middle) gets ready for a match on Oct. 22, 2019 at Houck Stadium in Cape Girardeau.
Photo by Jelani Days

Abby Tremain is looking to add to her successful career as she enters her final season with the SEMO women’s soccer team. Treamin’s teammates and coaches say her energy, leadership, and persistence are a few of the things that make her such an exciting player to watch.

Tremain has grown steadily as a player on and off the field every year she’s been in the program. Her play on the field and her development as a leader have made Tremain highly successful and adored by her teammates.

Tremain is a senior midfielder from Bridgeton, Missouri who has played all four years for the Redhawks.

Tremain came in as a freshman and has been perfecting her craft since the day she set foot on campus. She said she had to work extra hard because of her smaller stature.

“I think the biggest thing for me is the speed of play and physicality,” Tremain said. “I’ve had to adapt to learning that style of play while also not being the biggest girl on the field, but it’s possible.”

Tremain also gave credit to her teammates for making her a better player through practice, allowing her to get quicker with her feet and improve her game overall.

Redhawks goalkeeper and fellow senior Bailey Redden said she has seen Tremain grow as a player since their freshman year together.

“She’s grown into such a role model for everybody on the team,” Redden said. “I think her positivity and her willingness to be a good teammate no matter what the situation is, whether she’s on the field or off, is one of the things that makes her so special.”

Redden said she’s seen Tremain’s confidence grow from year to year and that she has used her smaller stature to her advantage.

Head coach Heather Nelson was also quick to give praise to the senior midfielder.

“She constantly works on her game, and because of that, she is both tactical and technical,” Nelson said. “She’s been a very process-oriented player in our program.”

Nelson went on to add she has seen a “tremendous amount of growth” out of Tremain and said Tremain has dedicated herself to the weight room.

Nelson said Tremain’s role on the team has steadily grown since her freshman year.

“It’s changed like 180 degrees,” Nelson said. “In her early years, she was more of a reserve player for us, coming off the bench providing valuable minutes. As an upperclassman, it's completely flip-flopped, where the majority of the time, she’s a starter in our program. I would say her role has had a significant change.”

Tremain has been a steady player, improving her game every season, and it’s clear she will be greatly missed when she graduates by her teammates as well as the coaching staff.