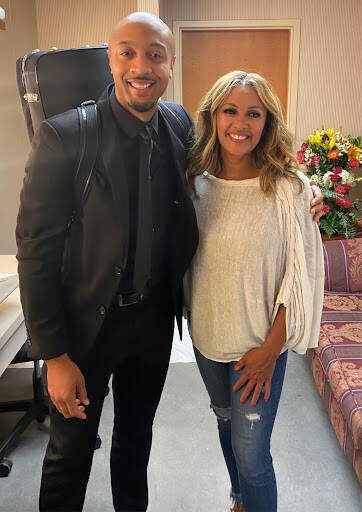 To say Joseph Jefferson is an accomplished musician would be an understatement.

Jefferson is an assistant professor of trombone and euphonium and the director of jazz studies at Southeast. He recently had the once-in-a-lifetime opportunity to perform with actress, singer and 1984 Miss America winner Vanessa Williams. While this was an exciting performance, this opportunity was just one piece of Jefferson’s highly-accomplished career.

Jefferson has performed in numerous ensembles and festivals, as well as with many well-known artists, and frequently presents research at conferences. He has played and taught across the country, as well as internationally. But his journey as a musician started somewhere much closer to home: at Zion Baptist Church in Purdy, Va.

“My mom had me singing in the choir, and when I didn’t really want to sing anymore, I asked her could I play, and so I really started my journey with music by playing hymns in church behind my mom, listening,” Jefferson said.

Jefferson started taking piano lessons at age 14, but didn’t receive his first formal trombone lesson until he was an undergraduate.

“Being raised in a Black church really helped me with picking up melodies, rhythms and syncopation at a very early age,” Jefferson said.

It also helped Jefferson understand musical forms, style, and led to opportunities for improvisation. This experience was huge for his musical development, Jefferson said.

Jefferson went on to study at Norfolk State University, Shenandoah Conservatory and West Virginia University. He holds Bachelor of Music, Master of Music — Pedagogy and Doctor of Musical Arts degrees. He said he was very intentional about going to a historically Black university, a private university and a big, predominantly white university so he had three different experiences to draw from.

These experiences, along with being self-taught during many of the formative years of his life, allow Jefferson to cater to students from a wide variety of backgrounds, with a wide variety of learning styles. The ability to meet students where they’re at is important to Jefferson.

“If I try to teach 10 students the same way, two might get it; great, you got the two, but what about the eight? For me, the eight's important, you know, because I might have been one of the eight,” Jefferson said.

Additionally, one of the most important parts of Jefferson’s teaching philosophy is intentionally incorporating many different styles of music into his teaching. For example, one of Jefferson’s jazz ensembles is currently learning soulful music with elements from African American culture.

“It’s so important that we highlight these things, because if we didn’t have those [different] elements, we wouldn’t have all the wonderful music we have today,” Jefferson said.

This summer, Jefferson learned about the opportunity to perform in an ensemble with Williams as a part of the Colour of Music Festival. This performance featured all African American performers.

“You might sit next to someone who went to Juliard and someone that went to Eastman, or someone that’s from Africa. The wonderful thing about this ensemble is that you get to perform compositions that might not normally be programmed in orchestras,” Jefferson said.

The festival involved a week of recitals and masterclasses, as well as three long days of rehearsals. During a rehearsal, Williams’ musical director said it was the first time he had heard the brass play their parts correctly. It wasn’t a note thing — it was a feel thing, Jefferson said.

“He was super soulful, he wrote all the orchestra charts, and he was just absolutely amazing. He was a beautiful cat,” Jefferson said.

Williams herself was also amazing to perform with — very prepared, welcoming and warm, Jefferson said. He described the experience as similar to other performances where he had played with big artists, but still very personalized in the way Williams took time to connect with everyone. He even got to talk to her for a while and had his picture taken with her.

To conclude Jefferson’s time at the Colour of Music festival, there were two performances: one of Williams’ greatest hits and a Masterworks concert of classical music. This ability to shift to a completely different style of music is one of the things Jefferson loves most about how he has shaped his career and aligns with his studio philosophy to be as comprehensive as possible.

“If you’re going to be a band director, think about the types of music and the audiences that you have to serve. Marching band. Pep band. Jazz ensemble,” Jefferson said. “I’m doing my part, and the rest of the faculty are doing their part to provide our students with a comprehensive education so they can leave here well-rounded and service the needs of wherever they land,” Jefferson said.

Jefferson said his favorite thing to see in a student is curiosity.

Above all, Jefferson hopes to instill an eagerness to go above and beyond in his students, helping them develop into well-rounded musicians and lifelong learners. And maybe someday, they, too, will have their once-in-a-lifetime opportunity.