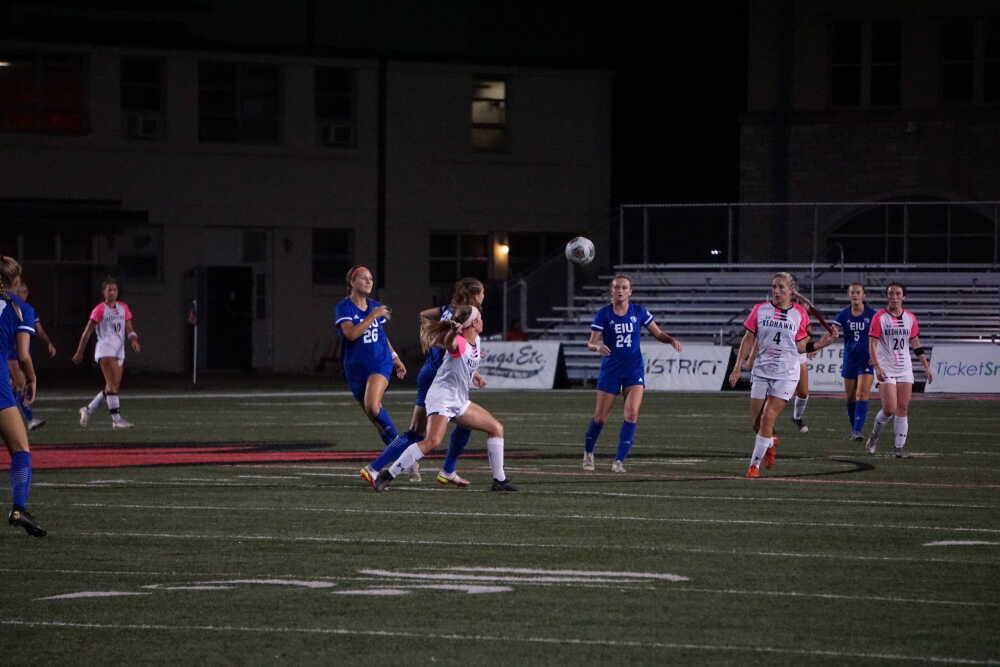 Freshman forward Katelyn Miller battles for the ball during Southeast's 1-0 win over Eastern Illinois on Oct. 14 at Houck Stadium in Cape Girardeau.
Photo by Hannah Wolfe

The game's only goal came in the second minute of the game and was scored by freshman forward, Katelyn Miller. For Miller, this was her first collegiate goal and it ended up being the difference in the game.

“Honestly it was kind of a blur, it happened so quick,” Miller said. “It’s really important scoring in the first half because then you know it’s not impossible and everyone’s just hyped up and we really carried that for the whole game.”

After the early goal, it was senior goalkeeper Bailey Redden who stole the show for the rest of the game, stopping every shot that came her way and shutting down the Eastern Illinois attack.

Redden said it was her defense in front of her and the adjustments made by the coaching staff at halftime that helped take the heat off of her. Redden said her defense did a great job of adjusting to the EIU pressure, which ultimately helped the Redhawks win the game.

“I’m a senior this year so just staying true to my abilities and staying confident is key to me and I can’t do it without my teammates in front of me,” Redden said.

Head coach Heather Nelson said it was the pressure they put on EIU as well as the early goal that helped her team come out victorious.

“We felt that success from the early goal was because of pressure and we needed to make sure that we’re coordinating ourselves, getting across the field so that we could put pressure on the ball and not let it come out of their backfield,” Nelson said.

Nelson said what impressed her the most about her team tonight was the ability of her squad to keep the energy up no matter who was out there on the field.

“I didn’t feel like we had any significant drop when we changed players out and I was really pleased with that,” Nelson said.

The Redhwaks advance to 2-3 in conference play and 5-8 overall with their next game coming on the road at Morehead State on Sunday Oct. 17 at 1pm.