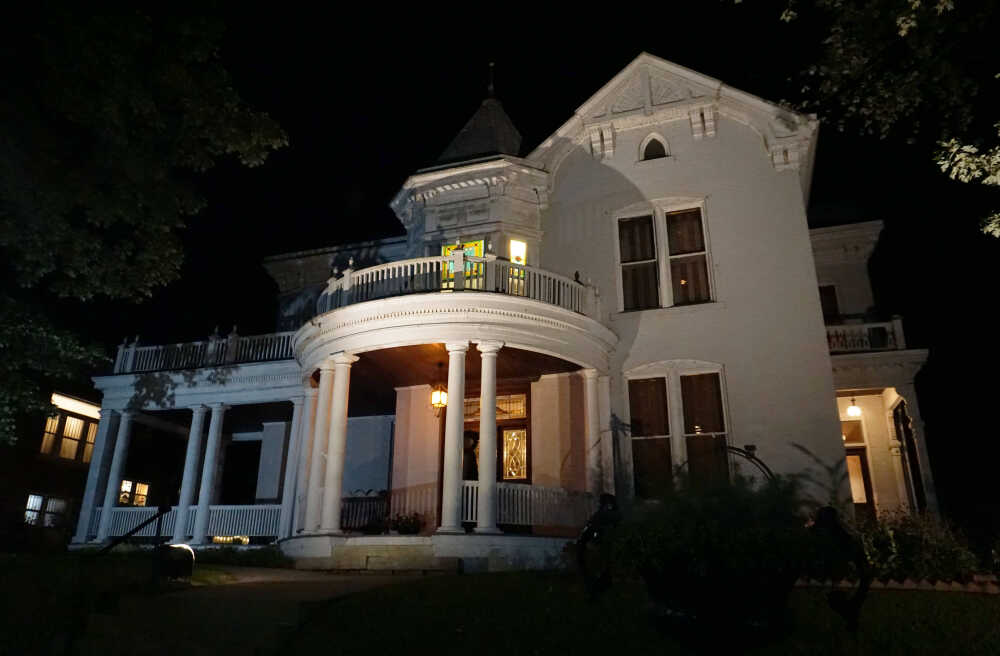 The Glenn House is a historical site in Cape Girardeau with many memories and ghost stories to tell. The house was a stop on the haunted ghost tour offered by SEMO.
Photo by Hannah Wolfe

Mershon has given haunted walking tours for 18 years. Mershon takes the groups through history, starting with Cape Girardeau’s origins. She has gathered historical knowledge and stories from the Cape Girardeau community over the years so no two tours are the same. Mershon will be guiding ghost tours of downtown Cape Girardeau throughout the month of October.

Mershon starts at the Red House Interpretive Center, explaining the story of Louis Lorimier and the infamous Lorimier Cemetery. She said some folks have felt sharp tugs on their hair or clothes at the cemetery, or witnessed floating orbs of light at night. From there, Mershon weaves in rich stories about atypical weather patterns, including lightning that happened to strike down a church steeple, and an out-of-season tornado that only seemed to target Catholic churches. Mershon also spoke about the rule of threes, which is things always happen in threes, and most people wake up in the middle of the night at three a.m., which is the unholiest of hours, commonly referred to as the witching hour. Mershon explained an alleged underground tunnel system, which may have been used to transport bodies that were not officially marked as deceased to Lorimier Cemetery.

The Glenn House was featured on season two, episode eight of the show “Ghost Hunters.” According to Mershon, film crews were in Cape Girardeau for about a week.

“They actually stopped filming for 24 hours because we did have someone who got scratched, and that’s in the episode,” Mershon said.

The Glenn House could be haunted by many different spirits, according to Mershon’s accounts of those who were deceased in the home. She talked to the group about several strange experiences she’s had in the old house, including a bell system that wouldn’t turn off, floating voices and Christmas presents that don’t seem to stay wrapped.

The tour consisted of approximately 40 guests, which Mershon said is on the larger side. Local author and photographer Tom Neumeyer helps with these tours and has assisted Mershon with gathering information about spooky encounters and the history of Cape Girardeau. Since this tour was offered especially for Family Weekend, the majority of the tour guests traveled from other places, such as Lincoln County, Mo., including the Rodenbaughs. Evie Rodenbaugh, who is studying musical theater at Southeast attended the tour with her family from Lincoln County.

“I liked the story about the synagogue,” Evie said. “She was an excellent tour guide, very experienced and had a lot of knowledge.”

There will be tours every weekend in October, including “Boos on Broadway,” which will take place Oct. 17. To attend a walking haunted tour, visit engage.semo.edu/coned/fall-fun/.