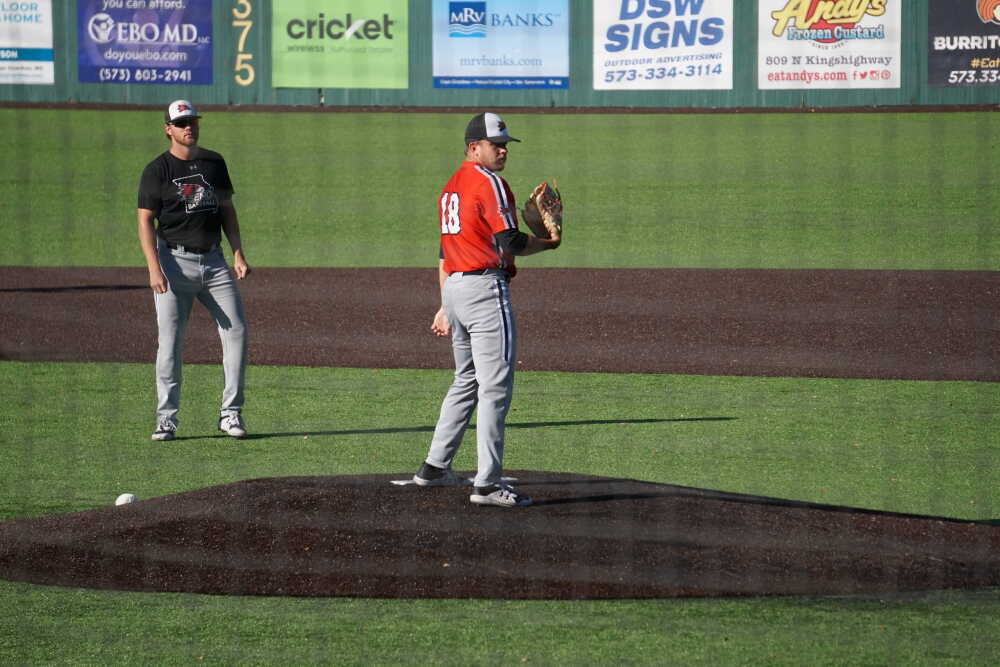 Junior pitcher Noah Niznik gets set to deliver a pitch during the fall world series on Oct. 20 at Capaha Field in Cape Girardeau.
Photo by Hannah Wolfe

This five-game series allows the coaching staff to evaluate the players in real-game situations. Redhawks head coach Andy Sawyers said he wants the players to be as competitive as possible.

“Well, I think that the one thing you can't simulate in practice is the stress and the pressure and anxiety of game day,” Sawyers said. “So we try to make, you know, six weeks for the fall as competitive as possible just because if all you do is feel-good batting practice or feel-good practice, you don't really get to see somebody deal with adversity, and baseball is a game of adversity.”

Having the opportunity to watch how players react to game situations is an important part to helping develop them. It also helps the coaching staff figure out what works best for the team.

“You need to have a place where they're competing and they're winning and they're losing, because that's where you find out what you got,” Sawyers said. “You don't find out what you have in a practice environment. There's got to be a competitive environment to see what they're made of. So, it's important for us, because that's where we have a chance to kind of see what we've got and what we need to do to get better.”

For the players, it allows them a chance to get back into game shape and compete against each other. Junior catcher Andrew Keck, who split time behind the plate and in right field last season, has been focused on getting healthy and working on his mobility behind the plate this fall.

“I've been doing [a hip mobility routine] for about two months now, and it's crazy how much better I'm moving not only behind the plate, but with my swing, as well,” Keck said. “I think it's gonna be a huge key factor in my on-field performance this year, which I'm super stoked about.”

The goal for sophomore pitcher Kyle Miller this fall is the ability to throw multiple pitches for strikes. As a freshman, Miller split time between the starting rotation and the bullpen.

“So, I got a fastball, curveball, slider, change-up, and I've been working on getting them all in the zone,” Miller said. “I feel like when I get at least three, three to four, in the zone consistently, then I'm the best that I can be.”

At the end of the spring season, the Redhawks lost seniors Connor Basler, Danny Wright, Austin Blazevic and Dylan Dodd, a third round draft pick by the Atlanta Braves. They also lost catcher Wade Stauss, who signed as a free agent with the St. Louis Cardinals.

This allows the chance for new players to step up and fill the void, and the fall season gives the team a chance to start building chemistry.

“I think the returners, and then the new guys, I think they're really starting to mesh, especially right now, you know, with the Fall World Series getting ready to wrap up,” Keck said. “You know, we spend a lot of time off the field together, too, which totally helps in creating a team chemistry. So, I'm excited to see how much more growth we have and what that will show in the spring.”

Jason Rackers transferred from the University of Tennessee to join the Redhawks, as well. Rackers was, at one point, the No. 2 junior college prospect in the entire country. There are also a few freshmen players looking to play a key role on the team.

“It comes down to the high school kids, probably the guy who's closest to getting a significant role would be Ethan Osborne, a left-handed pitcher,” Sawyers said. “We've got some other freshmen, as well, but we do have a pretty talented group, and I think all those guys are gonna have opportunities to compete and earn playing time this spring.”

The Redhawks have several returning players and are looking to win their second straight Ohio Valley Conference Championship and tournament come the spring season.