A Nightmare on Brookwood Drive: One Cape Girardeau man has enough spooky spirit for his whole neighborhood 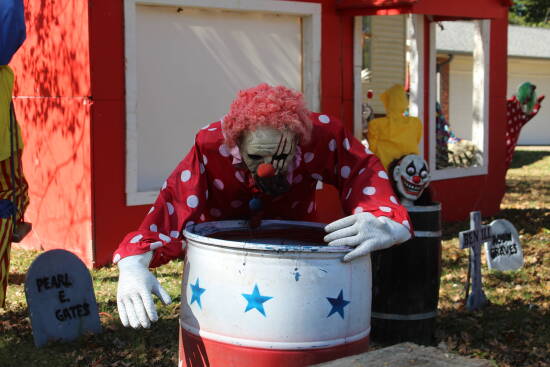 Throughout the rest of the year, Brookwood Drive looks like any other Cape Girardeau street. But come October, one resident transforms the neighborhood into a spooky, scary spectacle that draws attention from Halloween fanatics across the Southeast area.

Kevin Groves has become a Cape Girardeau celebrity for his elaborate Halloween decorations spanning across ten front yards. Each yard’s theme is different from the others and features familiar faces including Edward Scissorhands, Jack Skellington and Pennywise the Clown.

“I started about seven or eight years ago, just decorating my yard. I was trying to cram a lot in my yard and my neighbors offered to let me use their yards,” Groves said. “I try to add at least some new stuff every year. I come up with a theme and see what ideas I can get and what ideas other people can come up with.”

Groves said no one yard is his personal favorite, and he prefers to see the finished product.

“I really enjoyed making the pirate stuff last year,” Groves said. “I have a clown that has a fountain that runs through it and it looks like it’s puking. That’s always a favorite of the kids. But I really like when it all comes together and you see it working as one. I use six or seven projectors and fog machines and that just kind of adds to the fun of it.”

The full-scale creation is a product of year-round behind-the-scenes work by Groves, who takes time off from his job to set everything up and begins making the decorations in December. Groves said the decorations, some hand-made, are his creative outlet. The enjoyment from the community is an added bonus.

As Brookwood Drive’s popularity grew, fans of Groves’ work attempted to donate funds to supplement the cost of decorations. Groves said he didn’t want to accept donations for himself, as the project is his hobby, so he began taking donations for the Humane Society of Southeast Missouri. Last year, the donations came in at more than $2,000.

Halloween is a full family affair in the Groves household, and even his children have been a part of the action.

For more information, visit The Groves Halloween House Of Cape Girardeau page on Facebook, and check out our photo gallery for a look at some of Groves’ creations.