Big second half sparks SEMO in win over EIU 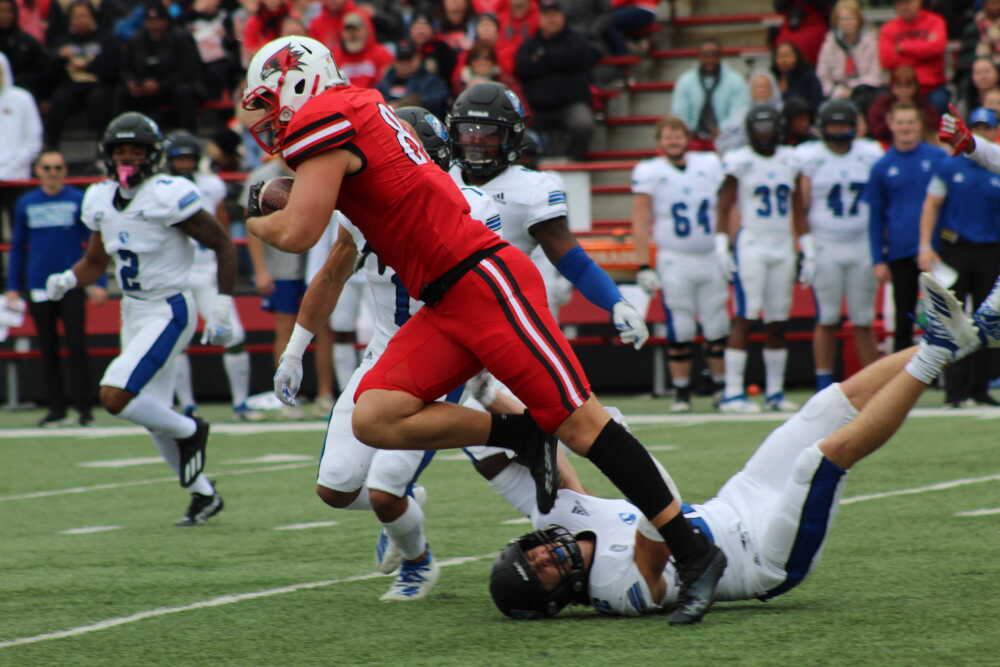 With the Redhawks being down 9-7 going into halftime, they came out on offense and surged for 31 points in the second half to help secure the victory over EIU on Oct. 30 at Houck Stadium.

The first half of the game was a defensive bout between the two teams. On the Panthers first possession, the Redhakws held them to a punt. But the Panthers came right back out to force Redhawks junior wide receiver Rashaan Palmer to fumble the ball. The turnover would inevitably lead to the Panthers scoring and making the game 6-0.

The Redhawks were able to bounce back two possessions later as senior running back Geno Hess scored on a 17-yard rushing touchdown.

Both teams would remain moderately silent as EIU went into halftime only up 9-7 against the Redhawks. But the tide shifted towards the Redhawks as graduate student defensive back Shabari Davis came out to score on a 86-yard kick return touchdown to make the score 14-9.

The Redhawks did not look back offensively as they continued to produce, and freshman quarterback CJ Ogbonna led the charge by combining for 3 total touchdowns in the second half.

Ogbonna said that his success has been due to the preparation he has been making to help the team succeed.

“I think the preparation with Coach Mcdowell has been helping me [alot],” Ogbonna said. “We’ve been watching the film and going through it. Just making sure I’m comfortable with the plays that he calls, and making sure that we’re on the same page.”

The defense proved to be viable for the Redhawks victory as they held EIU to only one score in the second half. With the victory over the Panthers, it moves them to 3-1 in the Ohio Valley Conference standings.

Redhawk outside linebacker Omardrick Douglas said that his team knows how to handle adversity and use it to their advantage when the playoffs begin.

Redhawks head football coach Tom Matukewicz noticed how even though things weren’t going the team's way at first, they didn’t give up and continued to work hard.

“It just says a lot about our team,” Matukewicz said. “If you ever write down everything that happened to this football team, I think there's a lot of points of the season where we could’ve stopped trying so hard. But we didn’t. The coaches kept coaching, and the players, and now we get what we wanted; an opportunity to play for a ring.”

The Redhawks look to build off this victory as they travel to Murray, Kentucky to seek revenge against the Murray State Racers on Nov. 13. Game time is 1:00 p.m.