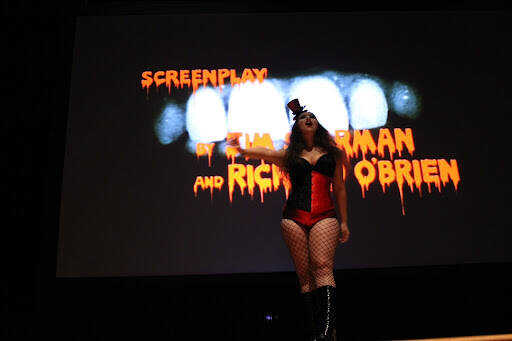 Megan Clifford, a shadowcast member, acts out the opening scene of the movie.
Photo by Alyssa Lunsford

Rocky Horror Picture Show (RHPS), a failed film turned cult classic, came to Southeast on Thursday, Oct. 28, in Academic Hall. It brought with it a spirit of acceptance, inclusion and risque fun.

RHPS tells the scandalous, avant-garde story of a 1950s heterosexual couple who spend the night in the castle of Dr. Frank-N-Furter, a cross-dressing alien. Throughout the film, the previously straight-laced couple has many scandalous adventures with Dr. Furter and the inhabitants of the castle and becomes more open with their sexuality and sexual orientation.

The film isn’t perfect — it uses outdated language that some consider offensive and portrays a lack of consent in a positive lens in multiple instances. This is especially harmful when considering the stereotype that queer and gender-nonconforming people are predatory. Many fans acknowledge these elements as a less-than-ideal product of their time while still appreciating the movie.

According to Rockyhorror.com, the first midnight screening of RHPS was on April Fool’s Day in 1976. It was a hit, starkly contrasting the film’s previous bad reception. Since it was one of the first movies to be openly accepting of LGBTQ+ characters, the midnight screenings provided a safe space for the community, as well as a sense of belonging for those just looking to have a good time.

Today, midnight screenings of RHPS are a beloved tradition all over the country. Over the years, screenings have become as much about how the audience reacts to the movie as they are about the movie itself. Audience callouts and even live actors are a huge part of the screenings, as well as interactive props, rice and hot dog throwing, water guns, and more.

BFA musical theater junior Ally Wukitsch, the casting director for Southeast’s show, was first invited to a midnight showing of RHPS by her dad, who also regularly attended the show during his college years. She was immediately hooked, and from then on went to every showing she could, she said. She estimates that she’s seen RHPS at least 100 times.

Wukitsch speculates with her theater background, the break from tradition and formality was a big part of the intrigue of RHPS.

“I have no idea why I love it so much. I think it was just like, the collectiveness of everyone yelling at a screen together," Wukitsch said. “And I think because it was so different from what I was used to doing, it just really excited me.”

One of the reasons why social work junior Joey O’Driscoll loves the movie is because they can see elements of their own gender fluidity in the main character, Dr. Frank-N-Furter.

“It’s one of the reasons the show got big in the first place. It was a place for queer people, and queer punk people, or just people in general, to explore who they could be in a world that was so binary and strict about heterosexuality, heternormativity and things like that,” O’Driscoll said.

Gillian Pendel is a senior BFA Theatrical Design and Technology student, and the president of the United States Institute of Theater Technology at Southeast. They thought hosting a showing of RHPS on the main campus would be a great way to integrate River Campus and main campus students, many of whom don’t often get the opportunity to interact.

“I was really looking for a way to connect the two campuses,” Pendell said, “and hopefully get the buzz going about River Campus.”

Main campus and River Campus students aren’t the only groups Pendel hopes this show will bring together.

“It’s a big thing with LGBTQ+ culture,” Pendel said. “When it first came out, the LGBTQ+ community was not as accepted as it is now, so these weird midnight showings are something people really leaned into. I hope a more open-minded and accepting group comes to this show, and people who don’t typically go to these kinds of things come to at least see what it’s about.”