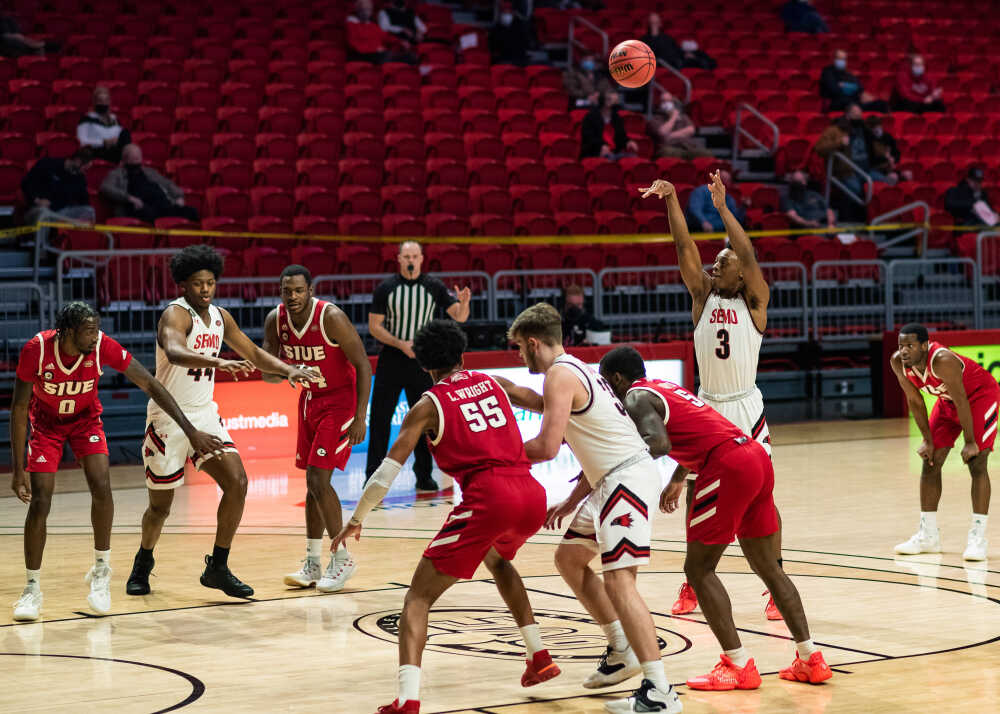 Following a season that saw the SEMO men’s basketball team make their first Ohio Valley Conference Tournament appearance since 2016-17, the Redhawks are poised to continue what they began building in the 2020-21 campaign.

The Redhawks were picked to finish fourth in the 2021-22 OVC Men’s Basketball Preseason Poll, their highest ranking in five seasons.

Redhawks head coach Brad Korn said it’s nice to be picked high in the preseason rankings, but once the season begins, none of it matters.

“I think the players should be proud of that because it’s the work they did,” Korn said. “But at the end of the day, it means absolutely nothing. Everybody has the same goal, so it’s like, what are you gonna do between now and then to put yourself in that position? That really matters, so that’s what we’ll try to focus on.”

The Redhawks are returning every player that logged big minutes a season ago.

The 2020-21 season saw Southeast finish 11-16 overall and 9-11 in the OVC. The Redhawks allowed opponents to average 71.7 points per game, good enough for sixth in the OVC. Korn said ideally, that number would be in the sixties, but he could live with them allowing close to that number again this season.

“You can always get better defensively,” Korn said. “I think the beauty of this year's team is we have some depth. ... A perfect scenario is probably moreso in the sixties. I’d be a little more comfortable.”

Among those returning is redshirt junior guard Nana Akenten who averaged 9.3 points per game and 5.8 rebounds per game last season for Southeast.

Akenten said having familiar faces in the system makes things easier as they prepare for the season.

“To be able to bring that same group of guys back with the addition of a couple young players, I think is going to be key to our success this year,” Akenten said. “We don’t have to go through the gelling process. We’ve done that, and we all have faith in Coach Korn, which is why so many people returned, so I think that it will all tie in together pretty well when it comes down to it.”

Korn said the consistency of his roster is something that excites him as the season gets underway.

“I think the influx of talent we brought in with the new guys combined with everybody coming back is what excites me,” Korn said. “They all seem to be really still bought into trying to do this with everybody in a team-oriented mindset.”

Korn said the ultimate expectation is to win the OVC, but the team has set smaller benchmarks that will assist them in the ultimate goal.

Redshirt junior guard Chris Harris is coming off a season where he led the Redhawks in scoring, averaging 12.3 points per game and led the team in assists with 88. Harris was named to the preseason All-OVC team, and, Korn said Harris has done a good job of getting in shape during the offseason and his passing ability is something that will be critical to Southeast’s success.

“He’s a really good half court offensive player — he can really playmake for himself,” Korn said. “He also makes great passes off the ball screens, [and] he’s got good signs. He makes on-time, on-target passes, and that’s probably the biggest thing with him is that you can put the ball in his hands, and something positive is gonna happen more times than not.”

Akenten said he feels honored to be able to play alongside Harris and said Harris is a selfless player that makes the right play all the time and gets everyone involved.

As a team, the Redhawks shot 35.2% from the three last season, and junior guard Eric Reed Jr. led the charge for the Redhawks, shooting 45.9% from deep last season.

Reed attributes his success to the time he’s spent in the gym working on his shot.

Korn said he feels like every member of the team can shoot the ball, so he tells them to let it fly if they’re open.

“When you’re open and the ball moves and you make the right play, shoot it,” Korn said. “We have guys that can shoot, and so it’s like, I’m not gonna try and get in the way.”

“With the roster we have, the people we have, and the talent we have offensively, if we’re getting more shots, I’d say [there’s a good chance] that more than half of those shots are going to go in,” Korn said.

The Redhawks will open the season on Nov. 9 when they travel to Springfield, Mo., to take on the Missouri State Bears at 7 p.m. Southeast will open the home portion of their schedule on Nov. 13 at 5:30 p.m. when they host Youngstown State at the Show Me Center in Cape Girardeau.