SEMO women’s basketball ready to compete with a young core 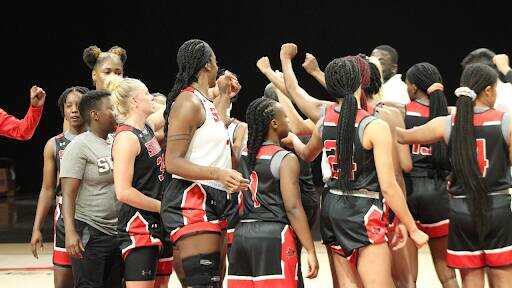 Southeast gathers near center court following a practice at the Show Me Center in Cape Girardeau. The Redhawks are coming off another winning season under coach Rekha Patterson.
Photo submitted by Southeast Missouri State Athletics

After last season’s OVC tournament run, the team looks to make their seventh-straight conference championship. The Redhawks return four starters from last season in seniors Taelour Pruitt and Deanay Watson, along with juniors Roshala Scott and Sophie Bussard. They come into this season projected to finish sixth amongst the OVC, according to OVC preseason polls.

“My first year here, they picked us to finish dead last, and I do realize that we lost a lot of players that produced for us,” Patterson said. “There are quite a few teams in our league that returned four or five starters, but at the end of the day, we are just going to play our own game, and when the ball is tipped, for these young ladies to be ready.”

Patterson said she understands there are improvements that need to be made every year with a new team, especially a young core like this one. Patterson’s ultimate goal every year is to get to the OVC Conference Tournament.

“Each year, we start with a blank record, and we understand what our goal is, which is to make the OVC Tournament,” Patterson said. “We are a completely different team than we were a year ago, filled with a lot of youth and new players, unlike last year, when we had a lot more experience.”

As the season looms closer and exhibition games begin, there are many questions about this squad's leadership with such a young group. Coach Patterson believes when it comes to games, the staff is looking to see who can step up and be a leader when nobody else is around.

With Sophie Bussard, one of the two seniors, sidelined due to a torn ACL, the juniors have been stepping up to help the newcomers get comfortable with their roles, Patterson said.

“This summer, things looked a lot different with only two seniors, so some of the juniors had to step in that leadership role to help out our new players to get more adapted to the system that we are trying to teach them here at Southeast,” Patterson said.

Senior Taelour Pruitt has been in this organization her entire college career and believes this year's team has more to prove.

“This team is different because we are younger and have a lot of new pieces,” Pruitt said. “I think we are really deep, especially at the guard spot, and although we are inexperienced, I feel that this team is quicker, more agile and a little bit more scrappier than a lot of the teams I have played on.”

Pruitt believes the team is adding something new every day and is improving 1% at a time, helping the newcomers learn the system and showing repetition is key to correcting mistakes.

With the Redhawks’ win over William Woods in their first exhibition game, they look to continue the momentum throughout the rest of their exhibition games and into the regular season.

They tip-off against University of Health Sciences & Pharmacy Nov. 9 at 6:30 p.m. at the Show Me Center.