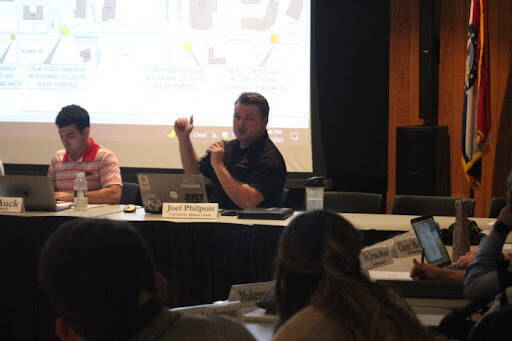 University Affairs Committee chairman Joel Philpott speaks to the Student Government Association (SGA) about the Crosswalk Project.The plans would expand crosswalks from Henderson Avenue down to the Show Me Center Lot.
Photo by Koki Lynn

Among the plans on the agenda for the Nov. 8 Student Government Association Meeting were new projects and a passed proposal.

First on the floor was the announcement to make changes to SELink, the SEMO website used by students and faculty to manage clubs and organizations on campus. Currently known as Presences, SGA discussed the future of student engagement software designed to aid students in getting involved on campus. While it is still in its early stages, SGA discussed possible features they would like to see.

SGA parliamentarian and junior political science and social studies education major Luke Collins brought up the idea that the new engagement software could allow keywords to be used, so students could link to clubs and organizations that fit their areas of interest.

“Being able to go and search and type like, plant club, and have Horticulture Club come up would be pretty awesome,” Collins said.

The future of the project and the software is only in its beginning stages, so features, options and even the name itself are still subject to change.

Next on the agenda was the Department of Public Safety’s new project, the Crosswalk Project. SGA University Affairs Committee chairman and junior finance and entrepreneurship major Joel Philpott said the project would aim to extend crosswalks from Henderson Avenue down to the Show Me Center parking lot.

“They’re adding some crosswalks in some places, they’re adding flashing signs with buttons on there. We’re also adding curb cuts on to them, so they are wheelchair accessible,” Philpott said.

The original proposal to the project started at $10,000 to support a portion of the curb cuts, but after deliberation, the proposal has been upped to $10,850 for the total cost. No formal vote has been issued yet, but looks to arrive on an upcoming agenda.

Vice chair of the Professional Affairs Committee Jenna Moore returned to SGA with the Faculty Senate's decision on the Military Affairs resolution they discussed at the Oct. 25 meeting. The resolution sought to provide active duty and veteran students with a way to request early leave and late start. This resolution passed unanimously, with full support of the Faculty Senate.