“What Became of the Dark?:” A lecture held in honor of the James Webb Telescope Launch 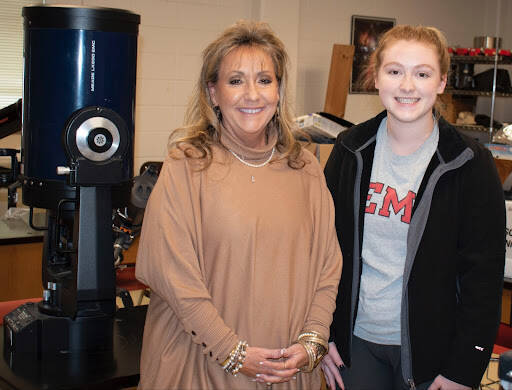 Instructor of chemistry and physics Pamela Mills and astronomy club president Madeline Keith will have an interactive booth Saturday, showcasing the dinosaur bones they found in Montana in June to explain what dinosaurs have to do with space.
Photo by Cynthia Wallman

NASA’s James Webb Telescope will provide images never seen before to the human eye after it launches from the European Spaceport in French Guiana on Dec.18 at 7:20 p.m Eastern Time, but have you ever wondered what your view of the night sky would look like without light pollution?

On Nov. 9, retired Southeast professor of physics Margaret Hill gave a lecture called “What Became of the Dark?” in Johnson Hall.

Students and community members were given a raffle ticket as they entered the lecture hall. Prizes included keychains, university flags, water bottles and T-shirts. Knowledge of how light pollution affects humans and animals is a prize everyone got to take home with them.

Hill said she would like for students to be aware of artificial light at night. It affects animal migration patterns and the ability to see the cosmos.

“It’s something you don’t realize to be a problem,” Hill said. “We don’t realize that excessive use of light, where it’s not needed or wanted, can be detrimental and harm wildlife and other beings.”

Hill’s lecture is just one of the many events happening this week for Space Week. Organizer and instructor of chemistry and physics Pamela Mills has worked with her committee to host an event each day until Saturday, Nov. 13. She said they want to highlight the James Webb Telescope Launch but hope to achieve more.

“We want to grow an interest in astronomy and form a community around that,” Mills said. “We hope that’s what happens after this week and that’s what continues, and it will not just be about the Webb Telescope.”

Junior Madeline Keith is majoring in biology, and this is her first semester as the president of the astronomy club. She helped Mills organize Space Week by making posters, learning about the telescopes to assist people at the events and planning how the astronomy club could help at the booths on Saturday.

Sophomore Savanna Leath dual majors in biomedical sciences and pre-med. She said the lecture made her think of a time when she drove the back way home, instead of using the interstate. She noticed she could see more stars.

“It was really interesting,” Leath said. “I really like the idea of the dark light, being able to see more of the universe. I would like to see it without all of the pollution.”

It will take 30 days for the James Webb Telescope to reach its million-mile journey out to the second Lagrange point, where it will then begin to orbit the sun. Lagrange points are positions in space where an object will stay put because the gravitational pull of two large masses precisely equals the centripetal force required for a small object to move with them.