The Squishmallow “recession:” Rise of the stuffed creatures 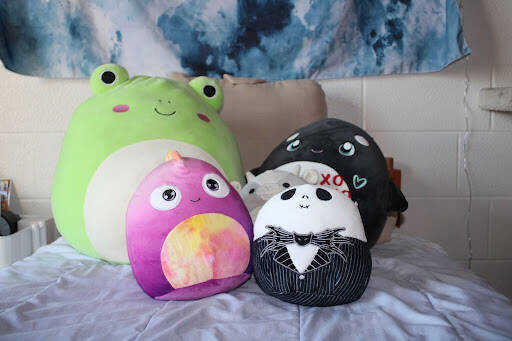 A collection of Squishmallows sit on Dominica Bowles’ bed, featuring two rare Squishes, the Jack Skellington and the scented mystery chameleon. They are a part of a large brand of stuffed animals which rose to fame after their debut on TikTok.
Photo by Emma Kratky

As Squishmallows have become a rare commodity to find, students on campus relish the collections they have and hunt for new additions.

After their release in 2017 by Kelly Toys, Squishmallows had a slow start to fame. Only in 2020 did they become popular, with social media groups and online communities forming around this sudden popularity.

But with their rise to fame also came a sudden scarcity in quantity. “Scalpers” began to raid the Squishmallow selection at stores across the country, only to resell them at prices ranging from 60 to 500 dollars per Squishmallow.

This new trend has affected many students on campus who have an interest in collecting Squishmallows. 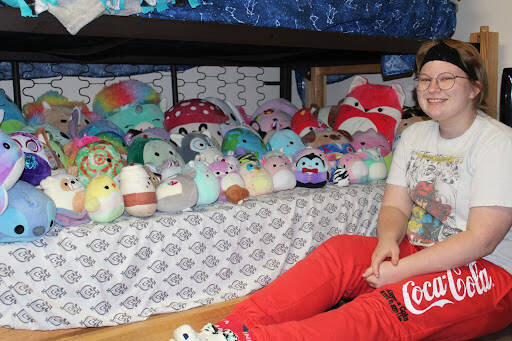 Lydia Rories’ Squishmallow collection is growing across her bed as she adds new additions frequently. Some of them are gifts from her friends, but most of them were bought by herself.
Photo by Emma Kratky

Early childhood education junior Lydia Rorie has been collecting Squishmallows for more than a year now and feels the scalpers take the fun out of collecting the stuffed animals.

“There are much more ethical ways to make money, instead of taking things that are essentially made for children and then selling them because you know there are adults who will buy them,” Rorie said. 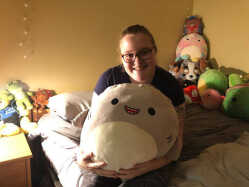 Bilek poses on her bed with a large shark Squishmallow. “Gordon is my favorite because he was the first squish that got me into collecting! My boyfriend was the one to get him for me and his smile makes him stand out.” junior Carly Bilek said.
Photo by Emma Kratky

Her collection currently consists of approximately 50 Squishmallows. They hold a sentimental value, as she enjoys the thought of being able to share them with her future students later in her career.

Another junior studying psychology, Carly Bilek, has a collection of approximately 100 Squishmallows. She started collecting them because of the friendly and diverse online community. Bilek has also noticed the recent uptick in resellers. 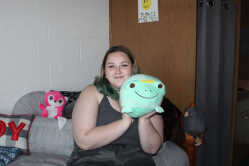 Tougle poses on her bed with a frog Squishmallow. “My favorite Squishmallow is my frog, Steven,” sophomore Jessica Tougle said. “My boyfriend got him for me while we were separated for the summer, and I had no idea I was getting him. I love frogs, and he's just so cute!”
Photo by Emma Kratky

“Some people collect for their kids, and I think it’s really rude for people to sell them at triple the price they bought them for. At the end of the day, they are just stuffed animals,” Bilek said.

Another large part of the Squishmallow community is the online presence. On social media apps like TikTok, creators film videos of their immense collections and showcase their rare Squishes.

Sophomore Jessica Tougle is interested in the online scene for Squishmallows. She has posted one video showcasing some of her collection, but said she mainly views others’ collections. 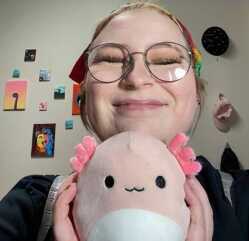 Rorie poses with an axolotl Squishmallow. “Archie is my favorite because he was one of the first ones that I got, and he is an axolotl, which is one of my favorite animals! I think they’re neat,” early childhood education junior Lydia Rorie said.
Photo by Emma Kratky

“One person I watched had a collection of like 15 mallard ducks,” Tougle said.

Along with the heavy rise in the social media presence of Squishmallows, a ranking system based on the rarity of certain Squishmallows has made its way into the limelight.

Scalpers and collectors alike go from store to store to try to find some of these rare Squishmallows, hoping to add to their personal collection or bank account.

Squishes like Avery, Santino and Jack the Black Cat can range from 800 to 2,000 dollars, respectively.

Based on current trends, Archie, Malcolm, Connor and Emily seem to be the most sought-out Squishes in 2021 and can be classified as new additions to the rare ranking system.

However, these are not the only Squishmallows people want or find interesting. Rorie, Bilek and Tougle all have their own personal favorites.

As these stuffed creatures continue to grow, many fear they may not be able to continue collecting due to the competitive nature within the Squishmallow community.

Freshman Maz Stroemer-Mariotti is worried about the possible repercussions relating to the competition.

“When it gets harder to find them and people resell them, the company begins upping their prices, and I was really worried it was going to be almost impossible to find them at a reasonable price,” Stroemer-Mariotti said.

As they have a special interest in chickens, Stroemer-Mariotti hopes to find more Squishmallows relating to these feathered friends. 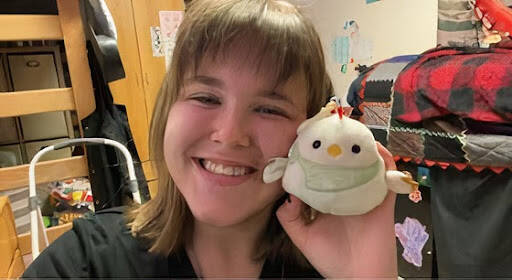 Stroemer-Mariotii poses with a small chicken Squishmallow. “Todd is my favorite squishmallow because he is a chicken and was one of my first ones I collected,” freshman Maz Stroemer-Mariotti said. “My sibling and I both bought ones from the same collection, and he just holds a place in my heart.”

As new collections continue to be released, especially around the holidays, it is unknown how the rise and fall of Squishmallows will continue to change.