Dylan Dodd and Wade Stauss: From Capaha to the Big Leagues 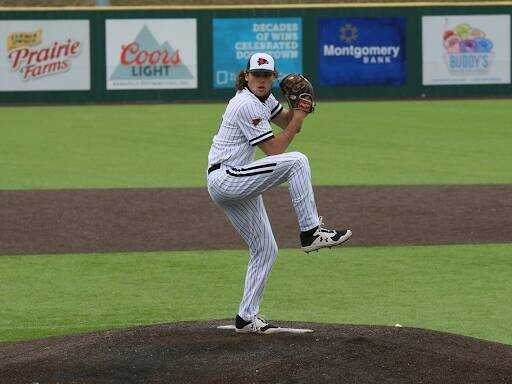 Dylan Dodd delivers a pitch during a game at Capaha Park in Cape Girardeau.
Photo submitted by Dylan Dodd

Former Southeast Missouri State University baseball standouts Dylan Dodd and Wade Stauss just finished their first pro seasons, but their professional success is just an extension of what was witnessed throughout their senior seasons at SEMO.

Dodd broke through barriers as the Redhawks’ ace in 2021, reaching 12 wins and leading his staff to the regional round of the NCAA baseball tournament. Since then, Dodd was drafted in the third round, making him the highest draft pick in Southeast history. He was signed by the Braves organization in hopes of transitioning his senior year performance into a big league career.

“It has been a pretty good transition,” Dodd said. “It has been more throwing than I have ever had, but I am glad that I was able to play a little over a month, ‘til the conclusion of the season.”

The mental side of the game and how to prepare for each start is one of the most important parts of the game Dodd learned from his time at Southeast.

“I have learned a ton about the game and the pitch calling on the pitching side of things,” Dodd said. “I think the most important thing that I have taken with me throughout this process has been the mental side of the game, especially through the pitching side of baseball, and how to prepare correctly for every start.”

While Dodd has been doing his thing with the Braves organization, former Southeast catcher Wade Stauss has also finished his first season at the big league level for St. Louis’ Low-A Affiliate, the Palm Beach Cardinals. 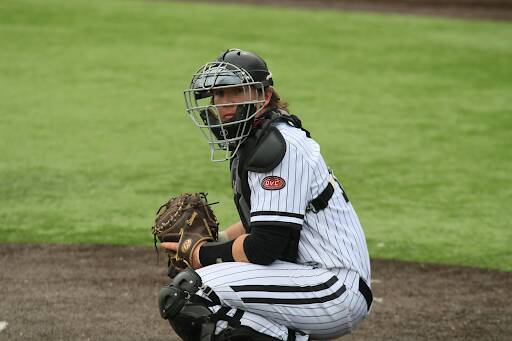 Wade Stauss looks into the dugout during a game at Capaha Park in Cape Girardeau.
Photo submitted by Wade Stauss

Stauss made his impact known at Southeast in his final year by posting a .997 fielding percentage along with his 341 putouts, which made him one of the best defensive players in the Ohio Valley Conference. Since his senior season, Stauss has signed with the Cardinals organization and has found his defensive ways, posting a .987 fielding percentage through 57 innings caught with Palm Beach.

“It has been good, but difficult, because you’re not quite playing the best-of-the-best, yet still playing against other professional baseball players,” Stauss said. “It is a big learning curve, but I have enjoyed it so far and look forward to getting started with this year.”

The transition process from college to the professionals is one of the biggest changes for athletes, but not forgetting where you came from and taking what you have learned is something Stauss has used to his advantage.

“Anything that you do should be 100%, and you should be able to take a lot of pride in the things that you love doing,” Stauss said. “It can range from keeping my locker clean to running a hard 90 and all the way up to blocking every ball in the dirt. Those are some things that I learned from playing at SEMO and that are translating well over to professional ball.”

Senior catcher and right-fielder Andrew Keck, who shared the field with Dodd and Stauss, knows the amount of work the two put in throughout their time at Southeast.

“It is pretty cool to see guys like Dodd, who came in our freshman year topping his fastball out at 88mph and being able to increase it to 93mph by our senior year,” Keck said. “As far as Stauss, he has always been a beast who uses his physical play to his advantage and has hit some of the furthest balls that I have ever seen.”

With Keck’s senior season looming, he looks toward Dodd and Stauss for advice on his future in the sport of baseball and pointers on what to expect at the next level.

“This is a huge season as far as my player development,” Keck said. “Throughout their seasons, I would talk to each of them around once a week just to catch up, along with asking some questions just to see what that next level is like.”

With Keck getting prepared for his future in baseball, Dodd and Stauss are getting ready for their second seasons in pro-baseball with their respective teams.

To follow both Dodd and Stauss with their seasons and stats, the information is located on https://www.milb.com/.