The Newsboys step into the light at the Show Me Center 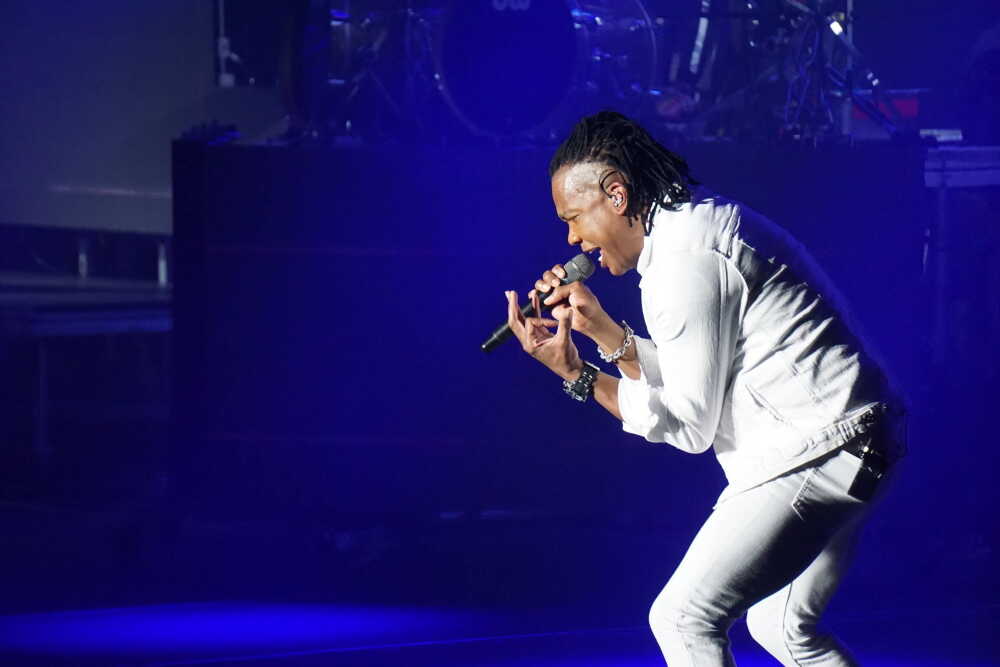 Michael Tait from the Newsboys sings to the crowd at the Show Me Center.
Photo by Hannah Wolfe

The Step Into The Light Tour made a stop at the Show Me Center on Saturday, Nov. 12, at 7 p.m.

A one-minute timer appeared on a screen behind the stage. With the lights out, over a dark stage, the crowd counted down from six. Before the clock struck one, the stage lights turned red, and the Newsboys headliners began their set with “The King is Coming” from their “God’s Not Dead” album.

The tour is unique because it features several performance groups instead of a simple opening performer and headlining performer. Cade Thompson opened the show with four of his songs, accompanied on stage by only a drummer. Thompson was followed by We The Messengers, a group that originated in Ireland.

Lead singer of We Are Messengers Darren Mulligan said the group was invited by the Newsboys to join the Step Into The Light tour.

“With the kind of character of these people and their heart for sharing the Gospel, it was a no-brainer,” Mulligan said. 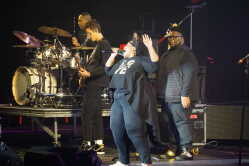 Mandisa sings Overcomer to the crowd at the Show Me Center.
Photo by Hannah Wolfe

The band Mandisa and singer Adam Agee also made appearances before the headlining band. Agee spent time after his set to ask the crowd to contribute to Child Fund International, a ministry the Newsboys partner with to sponsor education for children from more than 15 countries.

The Newsboys were founded in 1985 in Mooloolaba, Queensland, Australia, according to their website. They were signed to Refuge Communications in 1987 and released their first album in the United States, “Read All About It,” in 1988. In the 36-year history of the band, six of their 17 studio albums have been certified gold.

Lead singer Michael Tait, formerly of DC Talk, has been with the band since 2009. Tait addressed the audience between songs, introducing the band and talking about their history and their new song titled “Stand.”

Tait asked the audience to be seated and said he categorizes people into three types: quitters, campers and climbers. Tait encouraged the concert-goers to always be climbers. After introducing the band, Tait asked for a volunteer from the crowd to perform the first verse of DC Talk’s “Jesus Freak.” Tait selected a member of the audience to perform on stage with the band.

In the final throes of the concert, the Newsboys played “God’s Not Dead,” with much audience participation. They closed with “Holy, Holy, Holy,” from the “Hallelujah for the Cross” album, took a bow as a group, and exited the stage.

The Show Me Center will host the Arts and Crafts Extravaganza Nov. 20 and 21. To see other events hosted at the venue, visit https://www.showmecenter.biz/eventlist.