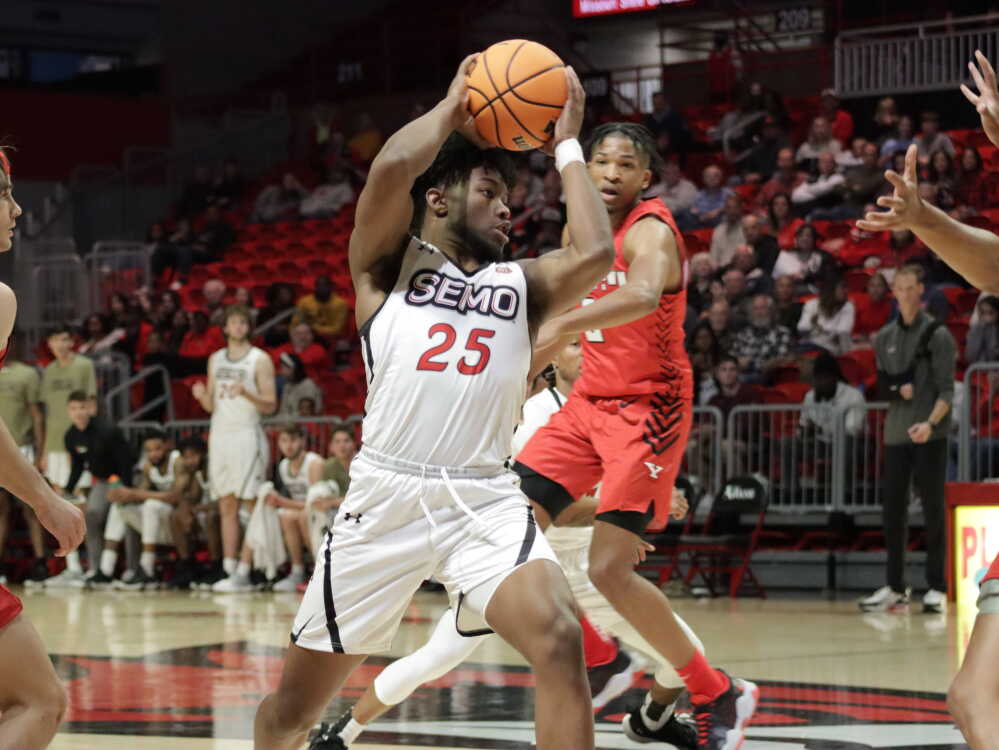 Senior guard Nygal Russell drives down the lane during SEMO's 97-79 loss against Youngstown State on Nov. 13 at the Show Me Center in Cape Girardeau.
Photo by Kailyn Veach

SEMO men’s basketball senior guard Nygal Russell has been putting in work on the court to lead the rest of his team to a successful season, and the numbers are there to prove it.

In the game on Dec. 8 against Evansville, Russell had seven points, three assists, and a career-high 15 rebounds. But head coach Brad Korn said doing the dirty work is just part of Russell's game.

“He’s kind of like a swiss army knife; he can do a lot of different things,” Korn said. “He brings a bunch of energy and physicality.”

Before coming to SEMO in 2017, the Houston native attended ASPIRE Academy, a preparatory basketball school in Kentucky. After ASPIRE, Russell said basketball brought him to SEMO, which instantly became a home for him.

Basketball has played a large role in Russell’s life. Since his first season as a Redhawk, Russell said he has taken initiative in undergoing beneficial changes in regard to his game.

“My game has just matured a lot for sure,” Russell said. “I understand how the college game goes and more like the flow of it. In high school, it’s kind of easy to get whatever you want but in college everyone was that star player before. I just feel like from my freshman year to senior year I’ve grown in my reason of understanding when to make plays and when not to.”

In his gameplay, Russell said he’s a believer of basketball not being all about scoring. Obtaining the other stats outside of points is a big part of his style of play.

“Physically, I feel like I’m pretty big,” Russell said. “So, when it comes to playing defense or rebounding, even if my shot isn’t falling, those are kind of natural for me.”

Russell's teammate and friend Chris Harris said Russell's energetic character when he’s on the court isn’t much different from when he’s not.

“He’s a good person, and he’s a jokester,” Harris said. “He’s definitely a worker, but I say he’s a clown first.”

Outside of basketball, Russell said he likes to cook, listen to music, skate, and spend time with his friends. His favorite music artist is Brent Faiyaz, but said on game days he’s likely to play anything.

“I listen to a little 50 Cent, a little bit of Biggie, and definitely Meek Mill and Lil Durk,” Russell said.

Russell said he sticks to a routine on his days off as well as game days. His off days usually consist of internships and trying to get ahead on schoolwork so when he gets back to basketball, he doesn’t feel overwhelmed.

Russell also said maintaining or bettering his relationship with God is always at the top of his to-do list. One of his biggest goals is trying to be a man of God and trying to better himself every day.

“He’s a man of faith, and that’s very, very important to him and really respectable,” Korn said.

Looking at the 2021-22 season, Russell said he has tunnel vision and is mainly focused on winning. Going into each practice or game, Russell said he’s just trying to find any way to come out on top.

“Just knowing it’s been my fourth year, I’d rather go out with a ring than average 20 points for the season,” Russell said. “And I don’t know if I can honestly say that was different for all those years. So, this year I’m just really trying to figure out how I can win and how I can get certain guys on certain pages so that we can all come together.”

SEMO basketball has been a huge part of Russell’s life, and he said it means everything to him. Russell said this program has helped him grow personally and become the man he is today, and for that he is forever grateful to the SEMO community.

Russell and his teammates will be back in action on Dec. 11 in Indiana to take on Purdue Fort Wayne at the Hilliard Gates Sports Center. Tip-off is set for 12 p.m.