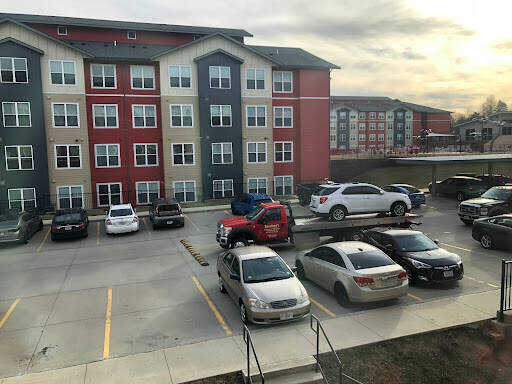 A car involved in the shooting is being towed from the Legends complex. The car was seized as evidence by the Cape Girardeau Police Department.
Photo by Southeast Arrow

At approximately 2:01 p.m. on Tuesday, Jan. 18, officers responded to a call about shots fired in the Legends apartment complex parking lot at 2070 N. Sprigg St.

In a text message, Hann stated officers arrived at Legends, where they located an injured man and an unoccupied vehicle in the complex parking lot. Police are searching for an adult Black male who was carrying a rifle during the incident and left the scene carrying a red duffle bag.

In a video posted to the apartment complex Facebook group, a man is seen carrying a rifle. The man with the rifle is seen in a physical altercation with another man.

A witness, who asked to remain unidentified, was at Legends when the shots were initially fired. The witness was standing on the stairs.

“I was just leaving my car after getting back from classes when I heard gunshots go off right next to me. I was almost frozen for a minute, and then I took off running,” the witness said. “When I made it back inside, I called the police, but it was hard, because I was almost hysterical.”

One day before the incident, Legends sent a Jan. 17 memo to residents stating their plans to hold a meeting in the near future regarding recent reports of gunshots at the complex. The memo did not include a specific date or time for the meeting. The memo also stated they will be working with the local police department to increase the safety and security of the apartment complex.

Below is the full statement from the Cape Girardeau Police Department regarding the shooting:

“At approximately 2:01 p.m., Cape Girardeau Police officers responded to the Legends apartment complexes at 2070 North Sprigg for a report of gun shots. Officers arrived and located a male who had apparent abrasions from a physical confrontation. Officers canvassed the area and located an unoccupied vehicle in the parking lot that had been struck by gunfire. This vehicle was seized for evidence. Footage of the incident was located, and officers are currently searching for an adult Black male with a thin build and long braids who was last seen carrying a red duffle bag from the scene. This suspect was in possession of a rifle at the time of the incident. Anyone in the area is suggested to use caution. Officers are still investigating the matter, and anyone with any information is encouraged to contact the Cape Girardeau Police Department.”

For continuing coverage about the investigation, visit the Arrow’s website.