Director of Jazz Studies named Jazz Educator of the Year 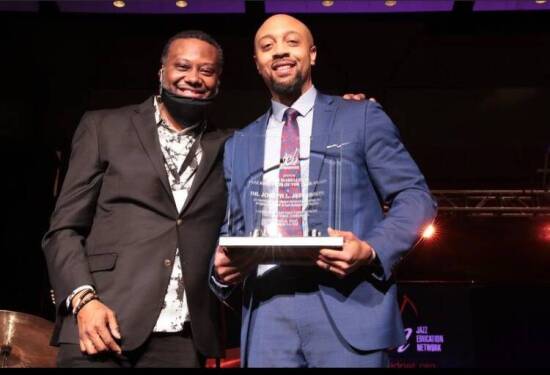 When students leave his classroom, director of Jazz Studies Joseph Jefferson said he hopes they leave with a sense of collaboration and curiosity. Earlier this month, Jefferson was named the 2022 Ellis Marsalis, Jr. Jazz Educator by the Jazz Education Network.

“I really love for my students to be a curious student, and a student who wants to learn more, ask questions and become a lifelong learner,” he said. “Specifically, in terms of jazz, you want students to be intentional about this music and understand why this music is here and why it was written, and what comes with playing this particular music.”

This year, the longtime educator and director of Jazz Studies at Southeast was nationally recognized for his achievements. Throughout his career journey, he said mentors initially guided him toward his calling as an educator.

“I always kind of had a knack for connecting with people and bringing people together,” Jefferson said.

His first job as a college instructor was teaching jazz appreciation, music appreciation and music theory at a community college. That was 2010 — now, Jefferson is head of the Jazz Studies program at Southeast and an assistant professor of trombone/euphonium.

The award Jefferson received is named for jazz musician and educator Ellis Marsalis, whom NPR calls the “patriarch of New Orleans’ most famous musical family.”

“I enjoy helping students reach the next level,” he said. “The thing about education is that you meet students from so many different levels. I just enjoy the fact of being able to reach students where they are and help them improve as musicians.”

When he received the call, he said he first told his wife, Tamika. She was “overjoyed” and equally excited, Jefferson said.

Being recognized for this particular award was especially meaningful, he said.

“The Marsalis name is a huge name in this art form we call jazz, so just to really be recognized for what I have done so far in my career and things I have done at Southeast was really inspiring to see,” Jefferson said. “It was pretty amazing to have that chance.”