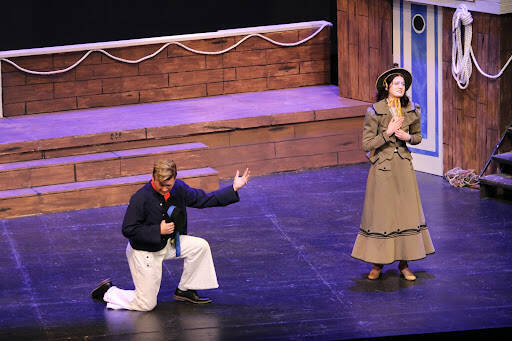 Ralph Rackshaw, played by Tyler Helm, confesses his love for Josephine, played by Meredith Kessler, during the Southeast Opera’s performance of “HMS Pinafore” on Jan. 21.
Photo by Alyssa Lunsford

The Gilbert and Sullivan comic operetta takes the audience to a fictional world set during the 19th century. The production follows the forbidden love of Ralph Rickshaw and Josephine as they navigate the dating rules of the Victorian era onboard the HMS Pinafore.

The cast was full of engaging characters such as the sabotage Dick Deadeye who is just as delightful as his name and the “hardly ever” seasick Captain Corcoran.

Audience member Jamie McCarthy, who had performed “Her Sorry Lot Who Loves to Well” in the past had an easy time following the opera.

“I know that they do not use mics. So, I think that it was really cool that they were able to enunciate so well, because I could understand everything they were saying,” McCarthy said.

Director Christopher Goeke said that the Southeast Opera rotates styles of operas and chose HMS Pinafore due to its unique style.

“Last year we did an Italian opera. It was a comedy, but still Italian . We haven't done a real musical opera in about four years and haven't done Gilbert and Sullivan style in about 10 [years],” Goeke said. “So, we thought it was a good rotation. It's a very unique style and we wanted to give the students an opportunity to experience it.”

“HMS Pinafore” had been in the works all of last semester according to SEMO student Tyler Helm. Along with the four hours required each week from the opera class, he put in an extra five hours of his own practice.

Helm was cast as Ralph Rackshaw, a lowly sailor and said he had a tough time getting into his character until closer to opening night.

“It was really hard. I had to really focus in and hone on what other people have done before me, and what I could bring to the character,” Helm said. “With that I was able to be who I was on stage. It's not like any other opera you've seen before. It's fun and nice.”

The play adaptation “HMS Pinafore'' was performed on Jan. 21 and will be performed in the Donald C. Bedell Performance Hall on Jan. 23 at 3 p.m. For a schedule of future River Campus productions, visit their website.