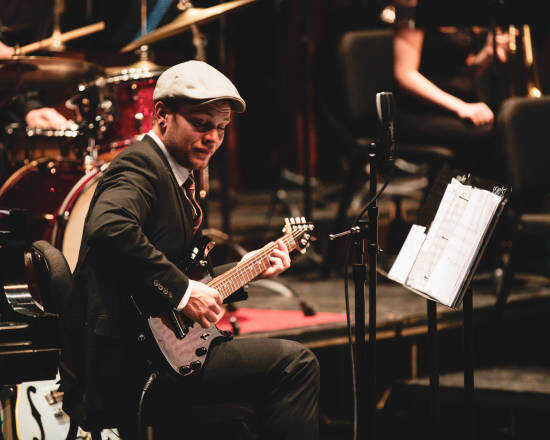 After a year hiatus due to COVID-19, the 23rd Annual Clark Terry/Phi Mu Alpha Jazz Festival was set to return to River Campus on Feb. 4 and 5. Winter storms on Feb. 2 and 3 led to the event’s cancellation.

Lead alto player Hunter Landstrom said the decision to cancel was made early Feb. 3, and Jazz Ensemble students were notified around 10:30 a.m.

The two-day festival draws band programs from across Missouri and Illinois, giving students the ability to perform in front of adjudicators and participate in other activities like improvisation clinics and Jazz theory. Festival director Joseph Jefferson said the safety of the festival participants is the most important.

“That’s the No. 1 priority,” Jefferson said. “You can’t do anything with nature — nature is its thing. So what we can do is make sure that people are safe, and then we can still also continue to provide other opportunities where students will have this experience with Dr. Merrell.”

Jefferson said featured artist Alton Merrell is set to play during the Cubop: Spring Jazz Concert April 12 at the Bedell Performance Hall. Merrell will also teach a few masterclasses and perform with students during his time at the River Campus.

Landstrom said he was glad to hear Merrell will be returning to play with the jazz ensemble in the future.

“With how busy he is and how sought-after a performer he is, it was kind of like, ‘Is this going to be the only time he could come?’” Landstrom said. “So, hearing that he’ll be able to make it down in April is very uplifting to all of us.”

Jefferson plans to invite the bands scheduled for the Feb. 4 and 5 festival to attend Cubop. While it won’t be the same experience, students from other Missouri and Illinois schools will still be able to meet with Southeast student musicians.

Those who already purchased tickets for the gala concert Feb. 4 will be refunded via their original payment method.