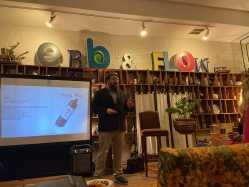 SEMO hospitality professor Nicholas Johnston talks about the power of packaging on perception at Ebb & Flow Fermentations on Wednesday, Feb. 16. His talk is part of the "Ebb Talks" series hosted by the restaurant.
Photo by Natalie Aarons

SEMO hospitality professor Nicholas Johnston gave a presentation about the power of perception and its influence on purchase decisions on Feb. 16 at Ebb & Flow Fermentations in Cape.

“The decision-making process is way more complex than what we give it credit for,” Johnston said.

Johnston spoke about the internal biases that influence people and explained how the appearance of a product affects how consumers evaluate the quality of it.

“The more we learn about what’s going on in our brain, what’s going on around us, and how those things are influencing us the better decisions we can make.” Johnston said.

Johnston explained how the brand packaging, such as bottle or box, had influenced the perception of quality. He also said brand packaging has changed throughout the years giving the example of canned wine.

“I would have never even noticed a canned packaging of wine if they never advertised it,” an older audience member said.

Johnston said older generations are used to a bottle of wine because that is how wine was advertised for those generations. Now, wine is being advertised differently with younger generations, such as canned wine options.

Johnston said Ebb & Flow helped with teaching his class in many ways. Owner of Ebb & Flow DeWayne Schaaf opened his restaurant to Johnston’s classes for tours. DeWayne has also visited some of Johnston’s hospitality classes to give presentations about owning a restaurant.

Ebb and Flow also hosts events called “Ebb Talks” that bring in local guest speakers, in which Johnston was the speaker this week.

“Ebb Talks are a very cool way to connect the community together,” Johnston said.

Johnston said he believes that it's important to have community talks after coming out of a pandemic, because many people miss having in-person interactions. He said he also believes the “Ebb Talks” program is a wonderful program for the local community to hear from other locals on what they are pursuing within their community.

When an audience member asked what Johnston would like to research next, he said he would like to look at the retail side of things.

As he started out this research project with just simple questions, he now has questions about the retail side of things that he would also like to research.

“Ebb Talks” occur on Wednesdays at Ebb & Flow Fermentations a couple times each month. To view the event calendar, visit their website.