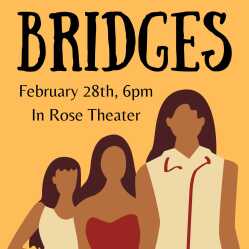 The annual "Bridges" event on Feb. 28 will celebrate Black History Month and Women's History Month with performances from members of the Southeast community. The event begins at 6 p.m. in Rose Theater.
Graphic by Emma Kratky

The Holland College of Arts and Media Diversity Committee will host the annual “Bridges” Diversity Showcase at 6 p.m. on Feb. 28, honoring both Black History Month and Women’s History Month. The event will take place in Rose Theater and feature performances, written compositions and music from members of the Southeast community.

Director of Jazz Studies Joseph Jefferson is chair of the committee. Founding member beginning in 2018. Jefferson said the committee chose to “bridge” the two months because both months are important, and people don’t always realize the contributions of both groups year-round.

“We believe that it's pretty powerful to really highlight those aspects, as well as other inclusive areas that we can throughout this event,” Jefferson said.

The event started in 2018, and Jefferson said it has grown every year since. In the past, the annual event has included spoken word, piano pieces, trombone, vocalists and dance.

“This year [is] to have a little bit of the same, just to give some variety for the people that are coming,” Jefferson said.

Music education sophomore Ashleigh Green has been on the committee since Fall 2021. She said she attended last year's event, and attendees’ stories were eye-opening.

“There was a script that I heard of a woman talking about her experiences and how it's different from African American women to white women, and just women in general, how they all experience different things,” Green said.

“The event is a perfect opportunity for people to say what they want to say about the things they are experiencing in a really safe and supportive place, and I’m excited to hear people speak about what they personally believe in,” Green said.

To learn more about the Bridges event, visit their Facebook.