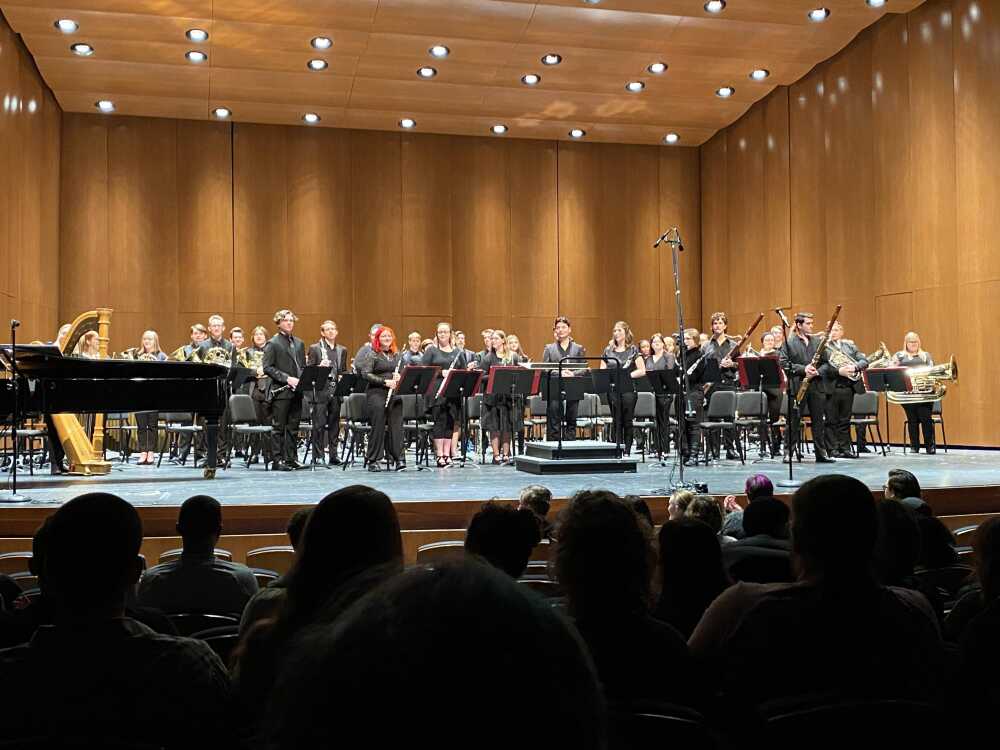 Students in the symphony wait with their instruments before the start of the Mardi Gras concert on March 1.
Photo by Stephen Jolliff

The Southeast Wind Symphony performed the Mardi Gras Wind Symphony Concert at 7:30 p.m. March 1 at the River Campus. Symphony conductor Jim Daughters said he was surprised at the audience turnout for the show.

“I thought that tonight's audience was going to be a bit smaller from our last performance, but it was a lot more than I expected, which was great,” Daughters said.

He said preparing for the concert was not easy because they started at the beginning of the spring semester, and recent icy weather has made it difficult for the group to gather and practice.

Musical education major and clarinet player Nathan Crader said getting prepared for the concert was not easy.

“When it came to practicing for tonight, the snowy weather that we had made it hard, since the campus was closed,” Crader said.

Members of the symphony were still confident in their performance. Crader said “Danzo No. 2” was the most difficult piece to play, but he believes their practice paid off.

Daughters said he also thought the symphony was well-prepared for the night’s concert.

“We prepared very well, and though there were a few things in each piece that was a little tricky for us, that is part of the learning process, and they mastered it and played very well tonight,” Daughters said.

In the audience were many students, faculty and supporters of the students in the wind symphony. Abigail Cook was part of the audience at the night’s show, and said she came to support her friend who played clarinet and bass clarinet during the performance.

“I was really impressed with the song ‘Dusk,’ and the last one that they did, ‘Machu Picchu.’ I was really surprised by how both were airy and light but still having those striking moments,” Cook said.

Cook said she has been looking into upcoming River Campus events and concerts and plans on attending more in the future.

As for Crader, he is anticipating the next symphony’s concert, which is the Five Mystical Songs concert March 8.

“I'm actually looking forward to our next upcoming concert. I know it will be quite the challenge, but I know that it will pay off very well, and hopefully that the crowd here tonight will help generate a bigger one for the next concert,” Crader said.

Daughters said he is looking forward to the symphony’s last concert in May, because they have rented what he believes is “the best wind piece” for the symphony.

“We will be doing a world premiere piece by one of our faculty Robert Fruehwald called ‘Butterfly,’ and we are going to do that piece, and that concert will be the first Tuesday in May, but that is the one we are all looking forward to,” Daughters said.

For information on upcoming River Campus events, visit their website.