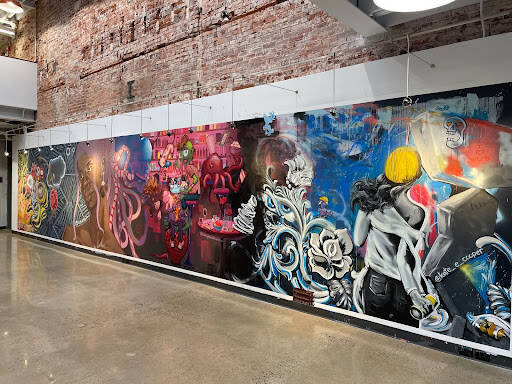 The students were first approached by their former art teacher, Associate Professor/Area Head of Painting Justin Henry Miller, about the new mural around Feb. 15. They were told they only had five days to complete it.

“My goal is that the community and institution can see what the students can do in a limited amount of time, and hopefully, that will encourage more opportunities like this,” Miller said. “I think it is one of the best shows we have had here at Catapult.”

Countless hours and sleepless nights went into producing the final product. The mural will be on display for the month of March only, and then it will be replaced by the next mural project. Here, meet the Southeast students that participated in the mural. 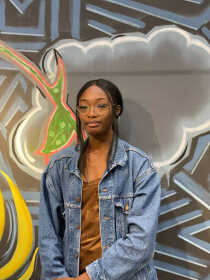 Ciara Potter is a sophomore majoring in graphic and interactive design. She came into the mural with no plan or sketch of what she wanted to produce.

Potter began making art in the first grade but she said she decided to take it seriously once she got to high school. She said the piece gave her a sense of relief and new discovery.

Potter was surprised with the bright color palette she created on the wall because she said it is very unlike her to produce.

“I was going through a tough situation, and all of the other artists really supported me through it,” Potter said. “Instead of having this inner turmoil, I instead put it on the wall and got peace of mind from it.” 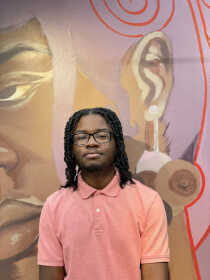 Wendell Stapleton is a graduate student at Southeast working toward a master's in higher education administration. He was a former student of Miller’s and graduated last year with his BFA in digital art.

When still unsure if he wanted to participate in the mural, he went to the first group meeting and realized these were artists he wanted to work with.

Stapleton wanted to produce a good portrait and used multiple references to achieve the final result after being convinced by Miller to participate in the mural.

“In my work now, I love to have some sort of representation for Black women and African Americans in general,” Stapleton said. “Recently, I have been quoting a lot of the West African pattern motifs because of my relationship with my African heritage.”

Stapleton plans on integrating his artistic side with his education administration master's degree, in hopes of finding a career where he can teach both. 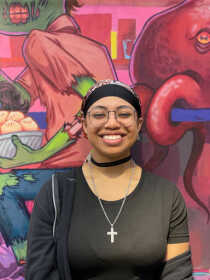 Kaiolahio Sooman-Stanton is a sophomore fine arts major with an emphasis in painting. She has always had a love for art but began to take it seriously around the age of 14.

She describes her section on the mural as a “dirty, yet classy cityscape.” She said it was daunting as an artist to only have five days to create an entire mural, but the other artists helped her create her vision for the wall.

“This is the fourth mural I have done in my life; it feels innate in me,” Sooman-Stanton said. “If I had to describe my section, it would be chaotic, newness and grandness with this new turning point in my life that has begun.”

Illustrative cartoon work is her favorite type of art to create. She began with a sketch for the mural and developed the painting around it. 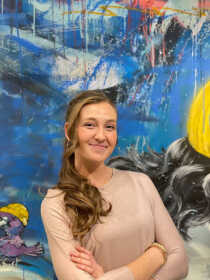 Kate Cooper is a sophomore majoring in BFA fine arts. She has not decided on her specialty but hopes to decide on painting or sculpture.

Cooper was first asked by Miller to assist with the mural and helped get more students on board. The students sectioned the wall into four pieces and were able to create whatever they wanted in their space.

“I talked with my peers, and we decided to turn it into a figurative mural based off our personal styles and what we like to paint,” Cooper said. “We all included these little faculty shoutouts in our sections, and that would make it cohesive throughout the whole mural.”

Cooper said her style is figurative and black and white. She also used spray paint to achieve her design. 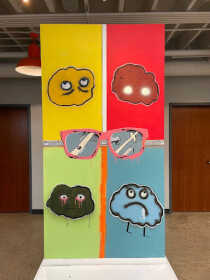 Kolebe Shanks is a senior majoring in digital art. He currently does not have any concrete plans after graduation, but hopes to move to Florida to pursue art opportunities there.

Shanks said he was interested in art from a young age. He was convinced by his friends when he moved to Saint Louis to take art classes at a local community college before coming to Southeast.

“I got a lot of my inspiration from Andy Warhol with the color scheme, palette and style,” Shanks said. “The piece is supposed to be a gentle nod to the professors and to show my appreciation during these hard times.”

He was first approached by Miller on the First Friday art showcase day in February and decided to get involved with it. Shanks said the piece represents multiple different Southeast art faculty and how they helped him maintain his creativity throughout his time at SEMO.

The mural can be viewed at Catapult throughout the month of March. Catapult’s hours of operation are Monday through Saturday, from 8 a.m. through 4 p.m. The public is able to view the mural, as well as any other art exhibitions free of charge.