Education Department dresses up as superheroes to empower students and teachers 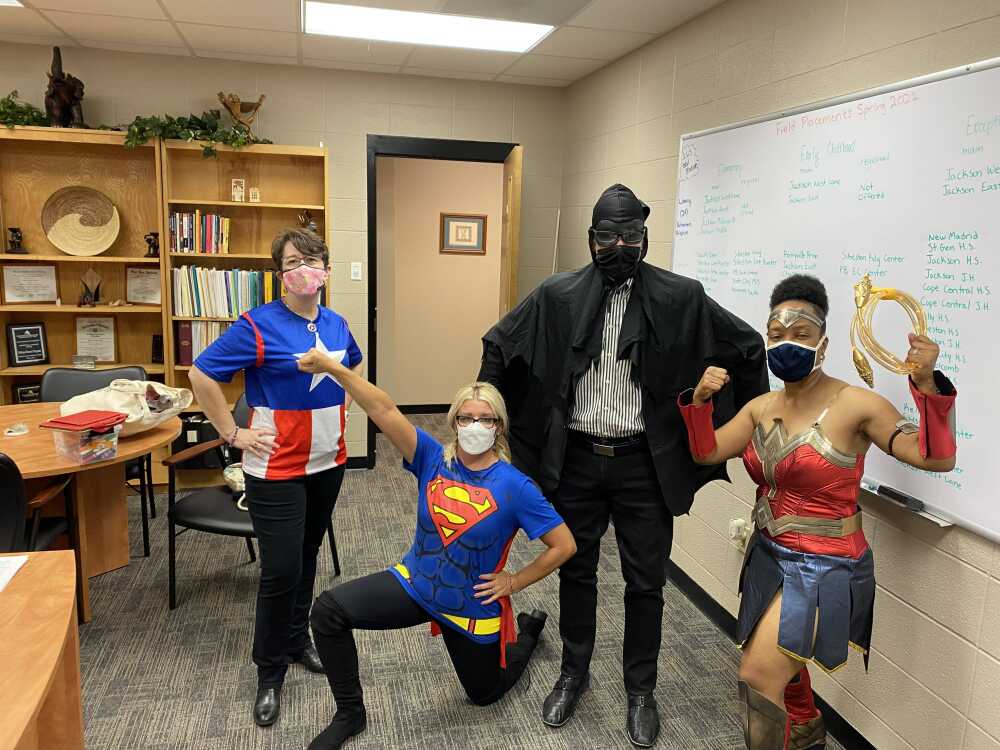 Most of the time, superheroes are only seen in films and TV shows. This time around, they are brought to life through the classroom. Teachers and students in the Department of Elementary, Early & Special Education dress up as many different characters for “Superhero Thursday.”

Superhero Thursday was started by Shonta Smith, Elementary, Early and Special Education Department chair, in the Fall 2021 semester. Smith said she sees it as a way to empower teachers and students to “harness their superpowers, walk in their greatness and be the best they can be by taking action.”

To help with this, Smith records a short video every Thursday morning in costume, providing words of encouragement on various topics such as enjoying yourself, reaffirming your purpose, and being determined & ambitious. 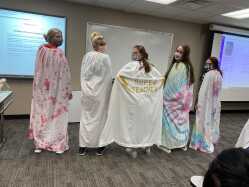 Dr. Brandy Hepler's students posing with the capes they created in her class.
Photo submitted by Shonta Smith

On March 10, Smith dressed up as a gladiator and broke out some of her dance moves to touch on the topic of problem-solving.

Smith said everyone has “superpowers,” and she wants people to use them to bring out the best version of themselves and the best versions of the individuals around them.

The superpowers are related to the different behavior preferences of humans, Smith said.

There are typically four behavior and personality traits that all humans engage in consistently, depending on who the individual is and the circumstances the individual experiences. This is seen through the Dominance, Influence, Steadiness and Conscientiousness (DISC) Model, created by William Marston, Smith said. The DISC Model is what showcases those behavior and personality traits, helping people to understand themselves and other people.

Smith wants to use superheroes as a representation of those behavior and personality traits to help people understand themselves better. 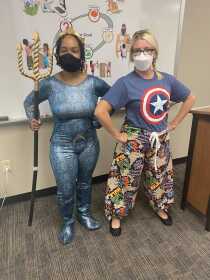 “Each one of us is great. Sometimes, though, people have a hard time identifying what that greatness is,” Smith said. “That's where your superpowers are. When you think about a superhero and you think about yourself being a superhero, you identify that you have a superpower.”

As everyone starts to understand themselves and each other better and harnesses their superpowers, Smith said this could lead everyone to work together more efficiently and create an atmosphere in which everyone can succeed.

Brandy Hepler, instructor in the Department of Elementary, Early and Special Education, joins Smith as she dresses as a superhero each Thursday. Hepler goes as far as creating her own pants for Superhero Thursday and helping students create capes.

Hepler said it has changed the atmosphere inside her classroom for the better.

“When Dr. Smith comes in all dressed up and excited, we get excited. It’s contagious,” Hepler said. “Freedom exists as students let their guard down, feel safe to talk and are not scared of being wrong due to the fun environment of it all.”

Larry Bohannon, professor in the Department of Elementary, Early and Special Education, is also involved in Superhero Thursday.

Bohannon hopes what he and his colleagues are doing will inspire their students as they become educators. 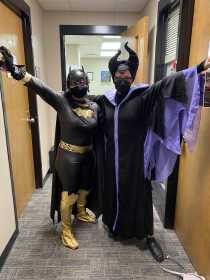 “I want them to learn how to be creative and step outside their comfort zone,” Bohannon said. “Trying new things inside the classroom is important because students are not going to be motivated doing the same things the same way all the time.”

From a learner’s perspective, Emily Gosling, one of Bohannon’s students, said instructors dressing up as superheroes makes them more approachable and gives them the ability to gain the favor of the students.

Smith and other professors in the department will continue Superhero Thursday throughout this semester. Check out Smith’s videos on her Twitter.