“Always willing to do something and constantly smiling — that is Linda Branion,” the article stated.

On Feb. 8, 2022, Linda Webb’s son, Diandrai Webb, posted on his LinkedIn and Facebook that his mother was the first Black cheerleader, during SEMO’s 1975 football season.

Diandrai said it was a great feeling to find the newspaper article his grandpa had saved that focused on this fact. Webb said it was laminated and on his grandparents’ dining room table. When Webb looked the article over, he noticed a lot of connections. 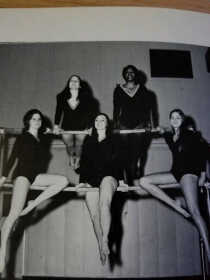 Diandrai said physically seeing the article for himself for the first time impacted him differently from his mom just telling him about her time at SEMO.

Linda Webb came to SEMO and received her Bachelor of Science degree in business education in 1977.

She'd been cheerleading since she was in eighth grade until her junior year of high school. Webb graduated a year early at the age of 16 from Lafayette High School in West St. Louis County.

Webb, along with six other Black women, tried out for the cheer squad. She was the only one to make the squad that year. Webb was only a cheerleader for one football season.

“I never saw it as me being the only Black cheerleader on the team,” Webb said. “I just saw myself as being a cheerleader. I never thought about race.”

Webb said she wanted to be a cheerleader for SEMO’s football team not only because of her love for the sport, but also because of the players.

In her 1975 interview with the Arrow, she stated, “I’m friends with all the Black football players, and at times, they all seem like big brothers to me.” She continued by stating, “They all work so hard, and maybe my presence might have given them a little lift during the games.”

One thing Webb said she loved about being a cheerleader was the crowd particiaption.

Besides being a part of SEMO’s football cheer squad and basketball Sundancers, Webb was also a member of the now-disbanded Association of Black Collegiates.

Webb was also the first Black female gymnast at her high school. SEMO did not get a gymnastics team until after Webb graduated in 1977, so she was not able to continue participating in the sport during her time at the university. She said she may have been on the gymnastics team if SEMO had one during her time in college, but she really came to SEMO because the university is a teacher’s college. 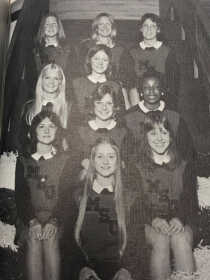 Webb with her cheer squad posing for a picture on media day. Location and date unknown.
Photo submitted by the Kent Library Archives

Webb said she did not even know at the time she was the first Black cheerleader at Southeast Missouri State University. Steve Clay, SEMO’s first Black staff writer for the Capaha Arrow, approached her with the information at the time he wrote the article.

After her time at SEMO, Webb married her husband, Harold Webb, Jr., three weeks before she graduated. They both traveled to Fort Stewart, Ga., where Harold was stationed for the United States Army for three years. After her husband was finished with the Army, they moved back to Cape Girardeau, where Webb worked for Procter & Gamble and taught at Metro Business College. She and her husband moved to Kansas where they stayed for 8 years, while there she taught accounting night classes at a community college. Webb was also a bookkeeper for a metal manufacturing business. Between all of this, Linda and Harold had two children together. The children are Dionna King, Diandrai Webb and Kimyatta Gibson. Webb said Kimyatta came is her husband’s child before they were married but she is like a daughter to Webb too.

Later in life, Webb came back to Cape Girardeau to work as a special needs aide for Cape Public schools. On Nov. 18, 2021, Webb retired from Midwest Sterilization Corporation as a quality assurance customer service representative after 28 years of her service.

Diandrai Webb wanted to personally thank Clay for writing the story about his mother, because not many people would have otherwise known.

Still to this day, SEMO Black students are still becoming the first to do something on campus.