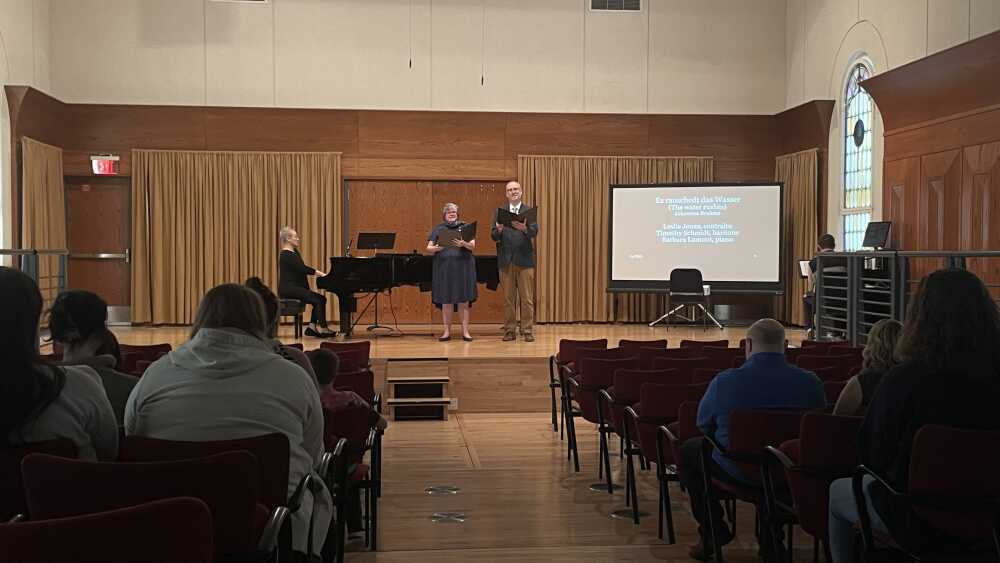 Barbara Lamont performs on the piano while Timothy Schmidt and Leslie Jones provide the vocals at Chamber Music with Voice. The concert was part of the River Campus' Sundays at Three series.
Photo by Gina Williams

Faculty from the Department of Music showcased music in “Chamber Music with Voice” on Sunday, March 27. The performance was part of the Sundays at Three series at Shuck Music Recital Hall at Southeast’s River Campus.

Instructor of voice Kaitlyn Robinson performed the soprano voice part during the event. According to the event listing, vocal music is a celebrated part of the chamber music tradition. Faculty members performed multiple instrumental combinations paired with voice at the concert.

“There’s just something so connecting about being in the same room with other people and enjoying live music, and you get the different sort of overtones that you wouldn’t necessarily get if you just sat and listened to it or watched it on TV,” Robinson said. “You get the real richness of the instruments and the voices, and you get to hear the complexity of it. I just think it’s important to gather to experience not only that, but to experience something as a whole and as a unit.”

Choral members sang songs in German at the event. Robinson said preparation for the performance entails studying the lyrics and practicing the choruses.

Vocal performance senior Meredith Kessler was part of the audience at the concert and heard some pieces for the first time there. Kessler attended the concert, so she could watch her professors perform.

“I also don’t get to see the professors do a lot of performances, so I really liked it,” Kessler said.

Former adjunct voice instructor Lori Shaffer said she enjoyed watching her husband Christopher Goeke perform. Goeke is a professor in the music department and performed multiple pieces at the concert.

“The fact that we have live music we can come and enjoy is a huge change for everyone,” Shaffer said. “I used to be on the faculty here, and so all those people were my colleagues, so to come back and get to see them and hear them was a great pleasure.”

To learn more about upcoming musical events at the River Campus, visit their events page.