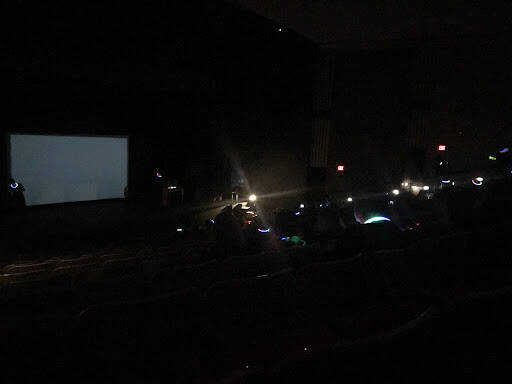 Student Activites Council (SAC) and the LGBTQ+ Resource Center hosted “Sex in the Dark” March 31 in Rose Theater. The whole event took place in the dark, and students who attended wore glow sticks during the presentation.
Photo by Anna Carpenter

“Sexperts” shed light on students’ sex questions while glowing in the dark at the “Sex in the Dark” event hosted by the LGBTQ+ Resource Center and the Student Activities Council (SAC) in Rose Theater March 31. The event was free to SEMO students; more than 40 students attended.

The program was hosted by national sex education experts Marshall Miller and Lindsay Fram. Miller has a degree in sexuality and society from Brown University and has managed HIV prevention programs. When he realized he loved teaching, he created the company Sex Discussed Here with his partner Dorian Solot. Through their national company, they host mulitple programs like Sex in the Dark and I Heart Female Orgasm all across the country.

Fram has a master’s in public health from Tulane University and has worked in sex education for 20 years. She teaches sex education to people of all ages, ranging from kindergarteners to adults. She also worked with the Peace Corp to launch HIV prevention groups in Guatemala for two years.

The Sex in the Dark program took place in the dark, as Fram said people are more comfortable being honest and open with their questions when the program is hosted without lights.

“One hundred percent, without a doubt, is more effective in the dark,” Fram said. “People have so many questions, and being able to ask them in a way that they are anonymous is easier.”

Junior family and consumer sciences education major Tara Nortman said she attended the event because she feels this helps her expand her knowledge for teaching students in her future career. 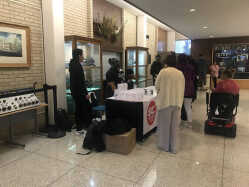 The SAC Executive Board and LGBTQ+ Resource Center representatives hand out glow-in-the-dark cups, glow sticks and buttons at the “Sex in the Dark” event. At the event, Marshall Miller and Lindsay Fram helped students learn more about sex.
Photo by Anna Carpenter

“The darkness made me more comfortable when asking questions, and I learned so much I can take into the classroom,” Nortman said.

Fram feels sex education and having accurate information is very important for people of all ages, but especially for college students.

“The general safety and health descisions that impact sex, and sex [itself] is always evolving. High school sex education hasn’t really changed, but sex has, and people should have up-to-date information,” Fram said.

Miller and Fram also discussed the adult film industry; they wanted to make it clear the people in the films are paid actors and actresses, chosen based on specific skills they have. They said when most people have sex, it is not the same as what happens in adult films, and individuals should not compare themselves to adult actors and actresses.

To quiz students on what they learned, Miller and Fram played a trivia game with the students in attendance and gave prizes to the winners. Students recieved buttons, an autographed copy of the book “I Heart Female Orgasms” by Marshall Miller and Dorian Solot, and a $25 giftcard to sex toy retailer Early to Bed.

Miller and Fram did a lightning round of questions after the trivia game that answered a few final questions from the audience.

Following the program, SAC President Tyrell Gilwater said “Sex in the Dark” was a hit.

“The program was very successful, the students were engaging, people were learning, the trivia was fun, the speakers were great,” Gilwater said.

For more information on the program or to ask questions, individuals can visit Fram and Miller’s website at sexualityeducation.com/.