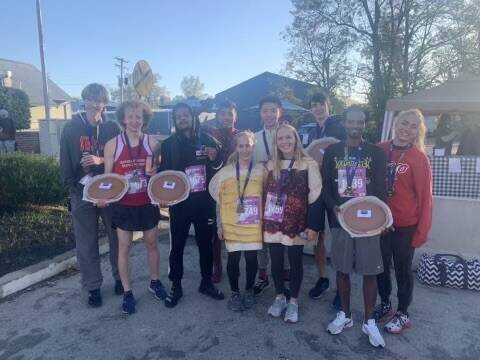 Running club members pose for a picture after running The Go! in St. Louis on October 17, 2021.
Photo submitted by Philip Francis

If you like running for any reason then SEMO’s running club might be just the thing for you. The club is registered with Campus Life and Event Services, as well as a club sport with Recreation Services, allowing them to run community races throughout the semester with no cost to the student.

The club meets Monday through Thursday during the semester at the Student Recreation Center. From there, they run routes throughout campus and the city of Cape Girardeau. Club president Philip Francis has one main goal for the club and makes sure that all members are aware of that goal.

“The goal of the running club is to create a welcoming, all inclusive environment, for the university community to have a good group to run with,” Francis said. “We're not division one athletes, but I know for me personally, having a group to run with is definitely better than running by myself as well as having a set place and set time to run.”

Many members set personal goals for themselves as well, like freshman Jacalyn Sexauer. Sexauer ran both track and cross country in high school and uses the club as an outlet to still run with a community of people.

“We go in with the mindset of, let's have fun,” Sexauer said. “A lot of it's our own personal goals for ourselves. We want to have a better time than we did personally last time. That's the mentality, I go in with it, which is a lot less stress and pressure than an actual competitive track team or cross country team.” 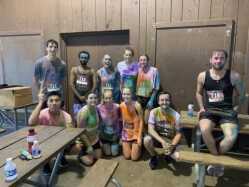 Senior Hannah Kroencke, like Sexauer, also ran track and cross country in high school. She wanted to continue to run in college, but not at the collegiate level, which is why she chose to join the club.

“It's nice to go and have other runners and have the opportunity to talk to them while running and still exercising and growing in that way,” Kroencke said.

Amongst the group the River Route is among the favorites. The route starts at the rec center and goes up New Madrid street to N Henderson Ave. The runners then take N Henderson to Broadway and follow it down to the riverfront. They follow the river wall down to the Red Star Access boat ramp and then head back up toward the rec center.

The club also runs races within the community as well typically consisting of 5K’s or 3.1 miles. For Francis it’s the combination of fun and competitiveness that makes the races worthwhile.

“Some fun ones we also went to was when we did a Halloween 5K in St. Louis and some of us that placed in our age groups were actually able to take home a pumpkin pie,” Francis said. “So with that there is a variety of people, sometimes other schools and other clubs sports will be there to run against so it brings in that competitive aspect, but there's also fun ones that we've been to such as Color Runs.”

For the club, races are not the only thing that are competitive. Occasionally, the club will have a little competition between members during practice. This comes in different forms depending on the day ranging anywhere from playing ultimate frisbee to Indian runs.

“We've had some of the guys in the past while we were out on a run and did what they called an Indian run,” Francis said. “Everyone's in a line and one in the back runs to the front and that just continues on.”

For more information or to join the club you can contact Philip Francis at runningclubsemo@gmail.com. You can also follow their Facebook page Running Club at SEMO.