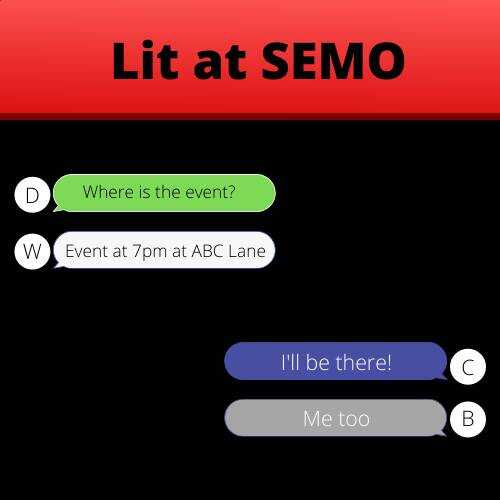 What started off as an idea has become reality: Black students on SEMO’s campus voiced their concerns about their safety on campus and the need to create a safe place for each other. Their solution for this problem: creating a group chat that is invite-only called Lit at SEMO, where students discuss events around campus, mental health, and a sense of community. Now, Lit at SEMO has grown to 200 members and counting.

The minds behind the quickly-growing group chat Lit at SEMO are hoping to grow from cell phones into a student organization on campus.

Marketing management senior Victoria Cherry is one of the creators of the GroupMe chat. She said the idea came from attending etiquette night for the National Pan-Hellenic Council (NPHC), an organization composed of the nine Black Greek fraternities and sororities on SEMO’s campus. During the meeting, people voiced concern as to why there wasn’t a group chat for their Black students.

Cherry said Lit at SEMO started out on Snapchat the week before the football homecoming game Oct. 21, 2021. President of SEMO’s Gamma Xi chapter of Alpha Phi Alpha Fraternity, Inc. Deshawn Smith started the first group, but it was deleted for an unknown reason. After this, the Lit at SEMO group moved to GroupMe.

Cherry does not credit herself for the successful growth of the group chat, but extends gratitude to everyone who helped spread the word.

“I asked the presidents of the different NPHCs to spread the word to their friends and people who they may know, and it grew from there,” Cherry said. “Lit at SEMO is also primarily about service opportunities and networking.”

Psychology senior Zykiah Williams is the president of SEMO’s Tau Omicron chapter of Zeta Phi Beta, Inc. She said the group chat has helped her promote events, such as study sessions in the library and other clubs’ and organizations’ events, as well as connecting with other Black students on campus.

“I encourage every minority group on campus to have their own group chat. It will be a safe space for them like Lit at SEMO is for us,” she said.

The National Association of Black Journalists (NABJ), Black Student Union (BSU) and the NPHC fraternity and sororities, otherwise known as the Divine Nine (D9), are organizations currently on SEMO’s campus that are dedicated to Black students, although they are not limited to only Black students.

“It is a really cool thing to a part of,” Muhammad said. “I feel more connected to my community. I’ve made some new friends, and we hang out a lot after classes. I am glad my friend put me in the group chat.”

Besides promoting events, people within the group chat also discuss mental health and ranting about life, home and school. Additionally, they also motivate others to keep pushing foward in times of stress.

Lit at SEMO hopes to expand from a group chat to an actual organization on campus in the future. Follow Lit at SEMO on their Instagram.