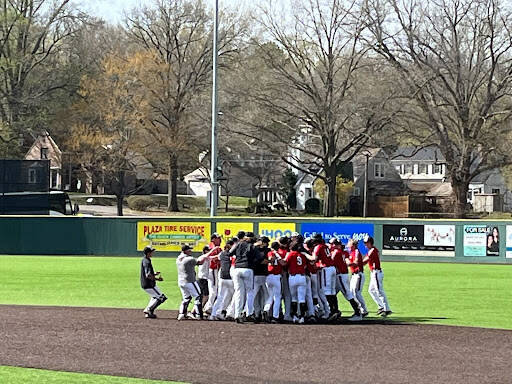 The Redhawks celebrate on the field after a two run ninth inning gives them a walk off victory against Murray State on April 10.
Photo by Matt Cagle

Senior pitcher Jason Rackers got the nod to start game one in the series on Friday. Murray State would get on the board in the first inning by way of a walk, wild pitch, and a single into right field.

The Redhawks would not get on the board until the third inning, when they put up three runs to take the lead. Sophomore third baseman Peyton Leeper started the inning for the Redhawks with a single into center field. Senior shortstop Tyler Wilber followed up with another single, advancing Leeper to third. Junior catcher Andrew Keck kept the line moving with a double down the left field line, scoring both Leeper and Wilber. Junior center fielder Brett Graber brought in Keck by way of a sacrifice fly out.

The Redhawks went on to score two more in the fifth after two singles by Wilber and Keck were rewarded with a double by Graber.

Most of the scoring for the Redhawks came in the seventh inning, when they brought across six runs. A single, hit by pitch, balk and intentional walk loaded the bases after a lineout by Keck. A walk with the bases loaded would bring in the first run of the inning. Junior right fielder Joel Vaske would then clear the bases with a three run double. Tyler Wilber would score two runners on a double after Vaske took third on a wild pitch and a walk and stolen base by junior left fielder Jevon Mason.

Starter Jason Rackers pitched six innings, giving up six hits and one run. He was relieved by senior pitcher Austin Williams, who began the seventh inning. Williams gave up two runs on one hit in two innings of work. Freshman Alex Esker entered the game in the ninth and closed out the game for the Redhawks.

Junior pitcher Noah Niznik got the start for game two on Saturday. He got into early trouble, giving up four runs in the first.

It did not take long for the Redhawks to respond, they stormed back and scored four runs of their own in the first to tie the game. A double by Jevon Mason started the offense for the Redhawks. Tyler Wilber scored Mason with a double. Peyton Leeper would keep the momentum going with a base hit that moved Mason to third. A massive home run by Andrew Keck scored them all and tied the game at four apiece. 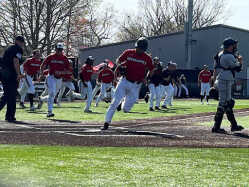 Catcher Andrew Keck scores the winning run as the team rushes the field in a walkoff win against Murray State on April 10.
Photo by Matt Cagle

Keck said although the offense was not looking to get all four runs back at once, getting the four runs created a brand new game.

“We got things rolling and getting four there was awesome but we were just trying to scratch a little bit and get one or two runs. Getting all four back created a whole new ballgame,” he said.

Niznik settled down after the long first inning, he retired the Racers in order for the next three innings. He was relieved with two outs in the fifth by Junior pitcher Blake Cisneros after loading the bases. Cisneros gave up one run before ending the inning.

Head coach Andy Sawyers praised Niznik for his ability to collect himself and keep pitching after the rocky first inning.

“He’s just a tough, gritty, grimy guy,” Sawyers said. “I’ve never seen him quit and he got punched in the mouth the first time and he went back out there and retired 10 straight. So very proud of him.”

Both teams scored one more run in the fifth inning and remained tied at 5-5 until the eighth inning, when Tyler Wilber smashed a three run home run to give the Redhawks an 8-5 lead.

Wilber said he was just trying to hit his pitch and it led to the game winning home run.

“I was just trying to do what I could and I got the pitch I was looking for and luckily I didn’t miss it,” Wilber said.

Sophomore pitcher Kyle Miller pitched two innings with one hit and no runs given up to close the game for the Redhawks.

Junior pitcher Tommy Windt was given the nod for the series finale on Sunday.

Murray State stuck first in the third inning, when they put up three runs with a home run and a pair of doubles. Two home runs in the fifth inning increased the lead to 5-0.

The Redhawks answered with four runs of their own in the fifth. Sophomore designated hitter Ty Stauss started the offense with a walk. Sophomore second baseman Ben Palmer followed the walk with a single. Junior right fielder Spencer Parker scored the runners and himself with a three run home run to give the Redhawks their first runs of the game. A triple by Jevon Mason and a lineout by Peyton Leeper cut the deficit to 5-4.

After the fifth inning it was a back and forth scoring affair until both teams were held scoreless in the eighth inning and Murray was unable to score in the ninth.

In the ninth, the Redhawks were down two runs but had the heart of their offense coming to bat. On the second pitch of the inning, Tyler Wilber smashed a hanging slider over the left field scoreboard to tie the game.

Wilber said he was trying to get on base and look for a slider, but when he didn’t get it he had to make an adjustment.

“I’m just trying to get on base and was actually looking for a slider the first pitch and he didn’t throw it,” Wilber said. “I needed to get on time for a fastball but he threw the slider and missed his spot with it.”

Head coach Andy Sawyers said he told his hitters they needed to be ready for breaking balls when they went to hit. 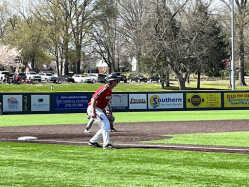 Designated hitter Ty Stauss takes a leadoff at third base against Murray State on April 10.
Photo by Matt Cagle

“The pitcher was throwing 60%-75% breaking balls so we were trying to sit soft and be on the soft side of timing and let the ball get to us,” Sawyers said. “He obviously threw a slider to Tyler and he hit it a long way.”

After the home run, Andrew Keck doubled into right center field but was able to take third after the center fielder misplayed the ball off the wall. He then scored the winning run after Brett Graber singled him home for the walkoff victory.

Sawyers said he was extremely proud of his team and they way they fought back for the entire game and found a way to win at the end.

“I’m as proud as I can be. They’re a very, very special group of guys,” Sawyers said.

The weekend sweep extends the Redhawks home winning streak to 17 games, they have not lost a game at home this year.

The Redhawks look to extend their home winning streak against the Southern Illinois Salukis in a midweek Tuesday matchup at Capaha Field on April 12 at 6 P.M.