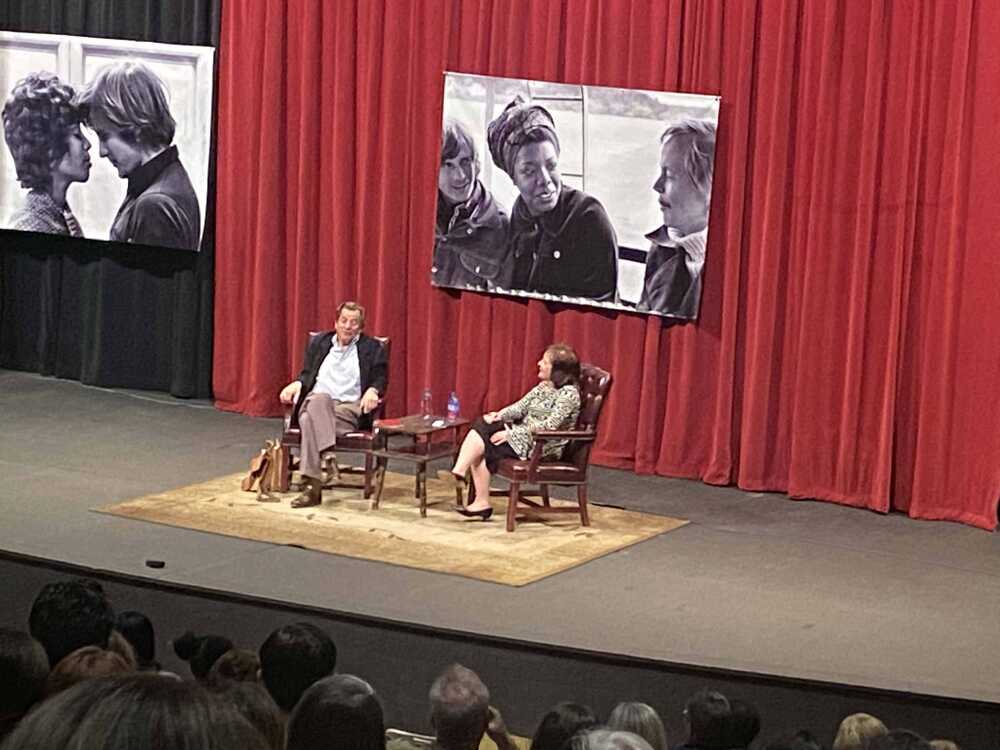 Actor Dirk Benedict and Mass Media professor Karie Hollerbach talk at the "See Me Series" on Wednesday, April 6. They discussed Benedict's role in the film and what it was like to work with Maya Angelou.
Photo by Lorryn Allen

Actor Dirk Benedict as Michael Winters from the film “Georgia, Georgia” spoke at 6:30 p.m. on Wednesday, April 6, in Rose Theater as part of the Department of Mass Media’s “See Me Series.” At the event, Benedict talked about his experience working with Maya Angelou.

Before Benedict’s talk, the Department of Mass Media screened “Georgia, Georgia” on the 50th anniversary of the film’s release. This was the first media work explored in the “See Me Series,” meant to expose SEMO to diverse creative media. A turnout of approximately 100 SEMO students and faculty attended the event, which lasted approximately three hours.

After Benedict spoke about his acting career, collaborating with Maya Angelou and working on the film, he answered questions from the audience.

Benedict said he played football in high school before becoming an actor. He began his acting career when he auditioned for a spring musical at his high school, and ended up getting the lead role.

“My part was underwritten with not much to work with; the script was vague and plain. I mostly followed Maya’s lead,” Benedict said.

He said Angelou intimidated Benedict on and off the set because she was constantly doing something, which made everyone on the set think they had to find something to do, too.

“Angelou [was] a tall woman with a big smile and strong aura; she made me feel like [I was] always supposed to be doing something,” Benedict said.

Approximately 30% of his scenes from the movie were cut, Benedict said. One piece of advice Angelou gave Benedict on set was, “You have to forgive them, they don’t know any better; if they know better, they do better.”

Benedict told a story about one of his outings with Angelou at a public restaurant down the street from the movie set.

“Maya talk[ed] with a loud voice while having conversations with anyone. People start to whisper to one another; Maya [didn’t] hesitate to go up to each person and ask, ‘Why are you whispering?’” Benedict said. “Maya was so loud in this public setting; people were not used to such a projected voice.”

Benedict said he played football in high school before becoming an actor. He began his acting career when he auditioned for a spring musical at his high school, and ended up getting the lead role. Sophomore early childhood major Macy Slinkard attended the event with her classmate Jessica Kucera who is also an early childhood major.

“Benedict made his words come to life on what it was like to work with Maya during this movie. Seeing the finished product from hearing where Benedict started out in his career is crazy,” Slinkard said.

The theatre was quiet while Dr. Hollerbach read the quote to the audience, once finished the room filled with applause.