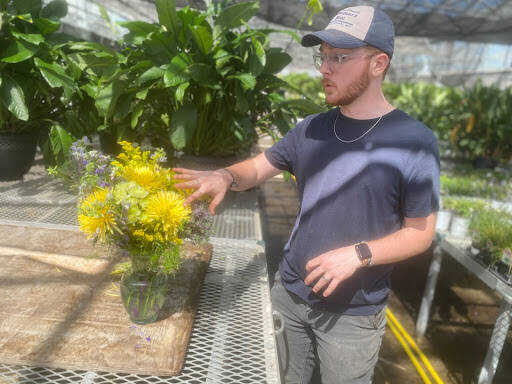 Among the flowers, shrubbery and succulents at the Charles Hutson Horticulture Greenhouse, Ian Graves feels in his element. The agribusiness horticulture junior walks along rows of various plants, helping customers with their questions. With each answer he gives, the passion he has for his job can be heard in his voice.

Graves got his start in horticulture while in high school, as he started working in the greenhouse at the Columbia Career Center in Columbia, Missouri. He loved working there so much, he knew he wanted to get involved at SEMO’s greenhouse and in their horticulture program.

He took a small break from the program, but a local grocery chain, Schnucks, needed a florist over the summer. He decided to jump back into making flower arrangements. 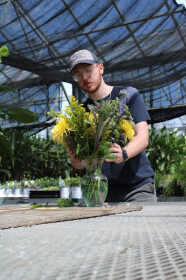 “I just recently started back into the arrangement side since August,” Graves said. “I really just wanted to get back to the greenhouse here at SEMO.”

“We grow centerpieces here at the greenhouse, and they contacted us for their event,” Graves said. “The two stage arrangements were very large, and we had to add foam inside to help create them.”

Graves said the Southeast foundation loved the stage arrangements so much, they decided to purchase them, which encouraged him in his floral designs and ideas.

Graves recently accepted a summer internship with Phillips Flowers in Chicago. This company provides floral arrangements for clients in Chicago, and they also offer interior landscaping.

The internship is through the American Floral Endowment, and it spans nationwide throughout the United States. Graves was chosen for the internship from thousands of applicants.

“I feel so completely honored to be chosen, and I am really going to be testing out to see if this is the direction I want to keep going toward,” Graves said. “Phillips Flowers does interior landscaping, but on a much larger scale, for businesses.”

Graves is minoring in interior design and architectural design and plans to use those skills in his future. 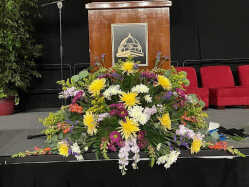 “My main goal is to get into interior landscaping,” Graves said. “I’ve been gunning for that, but if floral designing falls somewhere in the middle of all three, then I wouldn’t be mad about it.”

His favorite arrangements so far have been the stage arrangements for the President’s Council event, as well as centerpieces he arranged for the Martin Luther King, Jr. dinner Jan. 26.

“Those arrangements were on such a large scale, and my manager put that trust in me,” Graves said. “That really helped me in my designability and just trusting myself to do a great job.”

Graves leaves for Chicago for summer internship with Phillips Flowers once the spring semester is over.