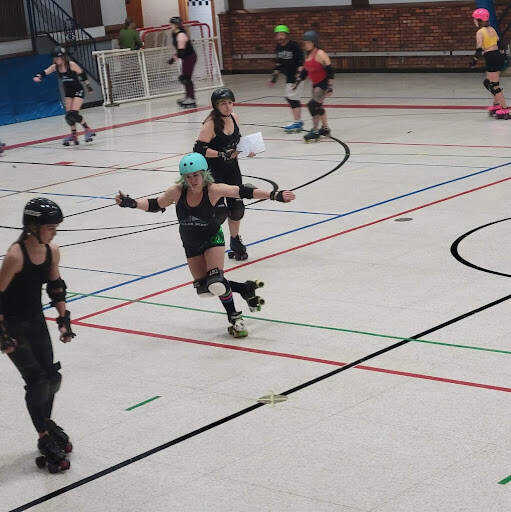 Roller Derby member “Deathstrike” warms up. She is one of the more experienced skaters on the team.
Photo by Cameron Edwards

The inside of the A.C. Brase Arena Building buzzed with excitement April 11 as the Cape Girardeau Roller Derby Team held tryouts for the upcoming Fall 2022 season.

Kristin “Fakin’ Bacon” Rickman has been with the roller derby team since 2014, and kept busy during tryouts instructing the new faces on what to expect as a part of the Roller Derby family.

“It doesn’t matter your gender, whether you are short, tall, overweight, skinny; we welcome everyone,” Rickman said. “People think you have to be this great skater to be on the team, but that isn’t the case. We want those who can be taught.”

In 2015, the Cape Girardeau Roller Derby team transitioned from being an all-female roster and removed the gender requirement. 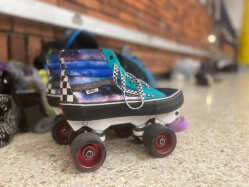 A pair of “Deathstrike’s” skates used in the game. She brought these for someone new to use.
Photo by April Styer

Rickman told the new group about the Roller Derby team giving back to the community through hosting charitable events for local charities, including the Safehouse for Women, Special Olympics and the Southeast Humane Society.

The Roller Derby Team took a hiatus due to the pandemic in 2020 and 2021. Now, the team has started to recruit new members or, “skater-tots” and “fresh meat,” as the veteran members call them.

One of the newest members is SEMO alum Erica Bowles, who graduated in 2018 and is now a speech language pathologist.

“I followed them on Facebook and saw they were having tryouts tonight,” Bowles said. “It looked like a lot of fun, and hey, maybe this is something I might like to continue. Plus, get in shape.”

New team members get to pick their derby name once they graduate from being “fresh meat.” Most of the time, it takes approximately three months but depends mostly on the individual. 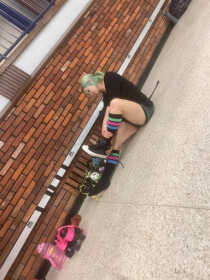 One of Cape Girardeau Roller Derby veteran players is “Deathstrike.” A fan favorite on the team, she prepares for warm-ups.
Photo April Styer

“I just did this on a whim. I heard about it several years ago, and I am always looking for new ways to work out,” Wyatt said. “I have only been with the team since January 2022, so I haven’t gotten a derby name. I’m still learning.”

Among the new skaters was a group of women from a fitness class run by SEMO adjunct professor Ellen Gipson, who teaches FN235: Nutrition for Health. She encouraged her exercise class to look beyond the gym to get into shape, which is what brought them to the Roller Derby tryouts.

“This past August 2021, I started coordinating a fitness field trip, and we wanted to try new things,” Gipson said. “Sometimes, it is intimidating to walk into something new like roller derby, but with a group of your friends next to you, it shows support we have for each other.”

Gipson said she was ready for tryouts, but wasn’t sure she could make the commitment with teaching on campus, raising two small children and teaching her weekly fitness class. 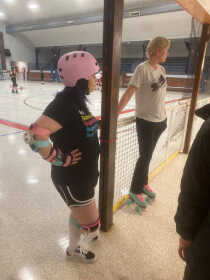 SEMO alumna Erica Bowles listens to instructions at the Roller Derby tryouts. She is one of the newest members to join.
Photo by April Styer

Before the “skater-tots” were let loose on the floor, Kristin “Fakin’ Bacon” Rickman gave them some last-minute instructions.

The Roller Derby team meets for practice every Monday from 6:30 to 9 p.m. at the A.C. Brase Arena Building. Anyone who wants to play for the Cape Girardeau Roller Derby team has to be at least 18 years old and pay a $25 monthly fee.

For more information about the Cape Girardeau Roller Derby team, look them up on their Facebook page or visit their website.