Redhawks sweep Morehead State with come from behind heroics 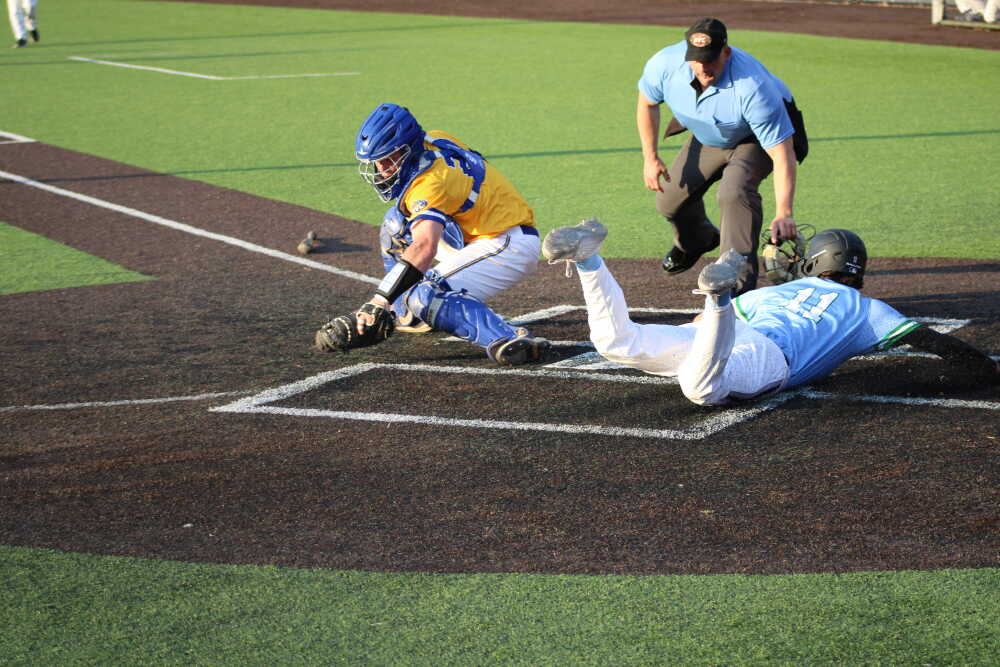 Sophomore second baseman Ben Palmer dives to homeplate to score a run for the Redhawks April 23.
Photo by Alyssa Lunsford

Senior pitcher Jason Rackers got the start in game 1. The Redhawks went down early after Rackers gave up two runs in the first inning. The Eagles would tack on another run in the third before sophomore third baseman Peyton Leeper cut the deficit to 3-1. Sophomore designated hitter Ty Stauss would double in another run in the fourth, making it a one run game.

The first four innings of the game were filled with hard hit outs by the Redhawks. They finally caught a break in the fifth inning after a throwing error committed by the Eagles’ third baseman allowed junior left fielder Jevon Mason to score from second base. Leeper would advance to third and then get brought in by way of a single from junior catcher Andrew Keck.

Morehead State made three total errors during the game and SEMO was able to capitalize on all three. A second error by the Eagles’ third baseman allowed sophomore second baseman Ben Palmer to reach first and advance to second. Mason made the Eagles pay for the error by hitting a two run home run, giving the Redhawks a 6-5 lead, their first of the night.

Mason said he was just trying to get a good swing on the ball to get the runner in when he hit the home run.

“The guy on the mound was throwing harder than their starter so I was just trying to get a flat bat through the zone and a good swing on the ball. It just happened to go out,” Mason said.

The Redhawks added another run in the seventh and held the lead until the top of the ninth. An Eagles two run home run off of sophomore pitcher Kyle Miller tied the game. Despite giving up the home run, Miller continued to pitch through the ninth and the tenth innings.

Two singles and a walk in the Redhawks’ half of the tenth inning loaded the bases and set up the team for victory with only one out. A hard hit ground ball by Palmer and an error by the Eagles’ shortstop helped bring home the winning run.

Palmer said he was trying to hit the ball hard anywhere he could to try and bring home the winning run.

“There was only one out so I knew in the situation they would most likely be going home on a ground ball. I was trying to get a hard ball through the infield and they booted it and we walked it off,” Palmer said.

Junior pitcher Noah Niznik got the start for game 2. Once again, the Redhawks went down early. A four fun first inning for the Eagles meant the Redhawks would have to come from behind. 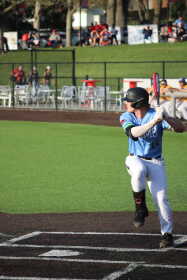 The Redhawks responded in a big way in the first, scoring six runs capped off by a grand slam by sophomore second baseman Lincoln Andrews. The Eagles would again tack on four runs in the second inning, knocking Niznik out of the game.

Junior pitcher Tommy Windt would come in relief for Niznik. In a game where eight runs had already been given up, Windt would shut down Morehead’s offense. He pitched the final 7.2 innings, giving up seven hits and allowing only one run. He also notched seven strikeouts and gave up zero walks.

“My slider was on point today,” Windt said. “I didn’t have much time to warm up but when I went out on the mound and started pitching I found out real quick I felt good and was going to be able to pitch well.”

Head coach Andy Sawyers said he saw calmness and confidence from Windt, which helped lead to his dominant performance.

“He was composed the whole game. There wasn’t any nervousness about him and he looked very confident from the moment he entered the game. He didn’t walk anybody and was aggressive when attacking hitters. He looked like a veteran who knew exactly what we needed,” Sawyers said.

The Redhawks would score four more runs in the second inning to retake the lead 10-8. They added three more in the sixth and the seventh and held on for the victory.

Jevon Mason, although going 0-3 in hitting, was hit by a pitch three times and walked once. Coach Sawyers said he enjoys having Mason at the leadoff spot because he can make pitchers uncomfortable during the at bat.

“He makes the pitcher uncomfortable on the mound,” Sawyers said. “He has speed and power so you can’t throw a fastball wherever you want because he’ll make you pay for it by hitting a home run; but he’ll also grind through the at bat and get on base another way if you try to be too careful around him.”

Game 3 was the second of a two game doubleheader on Saturday. Contrary to the first two games, the Redhawks got on the board first in the first inning. The Eagles would quickly wipe that lead away with a four run second inning, once again putting the Redhawks in a deficit. Both teams would add two runs in the third inning.

Lincoln Andrews would start the comeback in the fourth inning, hitting his second home run of the doubleheader. Jevon Mason would tie the game with a home run, also his second of the series.

Morehead would take the lead again in the seventh. Yet it would not last long. Lincoln Andrews would connect for his third home run of the day and tie the game at 8-8. He said he was staying ready for a fastball when he hit his home runs.

“I was just trying to see the fastball as deep as I could and tried to stay on it. I was able to put a good swing on it and it went out,” Andrews said.

The game was forced into extras after neither team scored in the ninth. Kyle Miller pitched three scoreless innings and gave the Redhawks a chance to win the game in the tenth.

With two outs in the tenth, junior center fielder Brett Graber stepped to the plate. He turned on a 3-2 pitch and sent a mammoth home run over the left field wall, giving the Redhawks their second walk-off victory in two days.

Graber said facing the pitcher the night before gave him confidence in the at bat.

“I faced him last night and he threw me pretty much the exact same pitch with two strikes. I had a feeling that was on the table and he threw the fastball down and in and I kept everything as simple as I could and got a piece of the barrel on it,” Graber said.

“Mason is really good then you have the Wilber and Keck combination in the three and four hole,” Sawyers said. “Those are the prime guys who score but you also have the ‘supporting cast’ who also are able to score when we need them to. They’re just a great group of guys who know how to hit the cover off the baseball.”

The Redhawks will travel to SIU on Tuesday, which will start a stretch of eight straight road games that will also hold one of the most important OVC matchups as the Redhawks travel to Belmont for a weekend series starting on Friday, April 29.