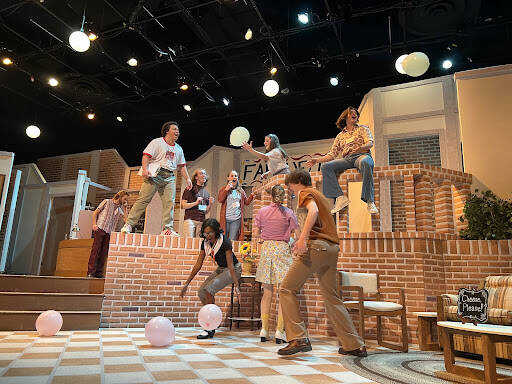 Romantic Movement opened its world premiere at the River Campus on Wednesday, April 27. The play is a comedy set during a summer during the 1960s.
Photo by Lillian Glenn

“The Romantic Movement” is a new play by Emily Bohannon and the winner of the first-annual Lanford Wilson New American Play Festival in 2021. The cast performed the first fully-staged production at 7:30 p.m. Wednesday, April 27, at the Rust Flexible Theatre at the River Campus, with subsequent performances April 28, 29 and 30. The play will have its final show at 2 p.m. May 1.

“The Romantic Movement” is a comedy set in the summer of 1967 where high school students gather with college-aged resident assistants in rural Florida to study classical music in the midst of the Vietnam War and the “Summer of Love.”

Playwright and screenwriter Emily Bohannon is from New York and came a week before the performance of “The Romantic Movement” to help the director and cast. Bohannon said she wrote this play out of her experiences studying classical music and chose 1967 because she is obsessed with the music of this time period.

Bohannon said she wanted this play to reflect what people were actually doing during the 1960s, instead of reproducing the Hollywood image of the time period.

“It's the most exciting thing to me to watch a play of mine be read and performed by other people,” Bohannon said. “It’s the best part of being alive. There is nothing better. It's terrifying and feels very vulnerable. I learn from actors more than anyone else. I really value my collaborators, designers, directors, but truly, actors give me what's clear and what isn't.” 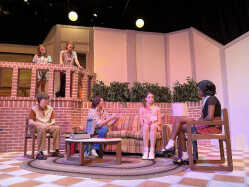 The play was directed by Kitt Lavoie, director, playwright and assistant professor of theater and dance at SEMO.

“I think everyone did a beautiful job,” Lavoie said. “It's a wonderful play, and I think the actors found exciting things in their characters, but then adding in the audience is that last piece of alchemy that really added together and locked in place. It was really exciting to see the actors come into their own in a really meaningful way.”

Musical theater sophomore Isabel Kissel played Rosemary, a sheltered girl who comes off as overbearing at first, but ends up helping other characters become more comfortable with themselves and their decisions for the future.

Kissel said she spends time before the show to connect with her cast members, since they are also her friends, and she knows if something goes wrong, they will be there for her.

“It was very reassuring having Emily here helping through the process and letting you know that you’re doing good work and doing her justice with her writing. I felt great about the performance, and it was great to have an active crowd that wanted to participate,” Kissel said.

Musical theater freshman Josh Neighbors played Jordon, a resident assistant who had the choice of coming out as gay or getting drafted for the war.

Neighbors said his character had a very intense connection with the symphony piece the show was written about, “The Romantic Movement” by Howard Hanson. He said every night, he would listen to the symphony before going to bed to prepare for the show and learn his lines pretty fast, despite the fact there were rewrites every week.

“Emily has been very hands-on in this production, and I have really appreciated that,” Neighbors said. “I feel very grateful and happy. It's less like an achievement and more like we have worked together to create this beautiful story that everyone has now seen, and it's out in the world officially, so that's really lovely.”

Acting junior Gabriel Lawrence played Troy, a football player who later gives up sports for his love of music.

Lawrence said his character thinks football is his life, so it was easy for him to drop into this character at the beginning because he was a three-sport athlete. 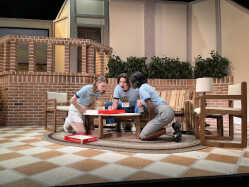 “It took me roughly a week and a half to learn my lines. I was fortunate to have played the same role in the stage reading this summer at the Lanford Wilson New American Play Festival, so I did kind of know the lines already, but did have to learn a few line changes,” Lawrence said.

Musical theater sophomore Peighton Robinson played Dorie, an African American violinist who faced the struggles of being judged based on her race.

“I use a lot of personal experiences from my own life, my mothers and my grandmothers. Combining all that together was my biggest inspiration for tonight's performance,” Robinson said. “I felt amazing about tonight's performance, and finally getting to do it in front of a live audience for the first time was just so exciting.”

To see upcoming events at the River Campus, visit semo.edu/about/campuses/river-campus.html or call (573) 651-2289.