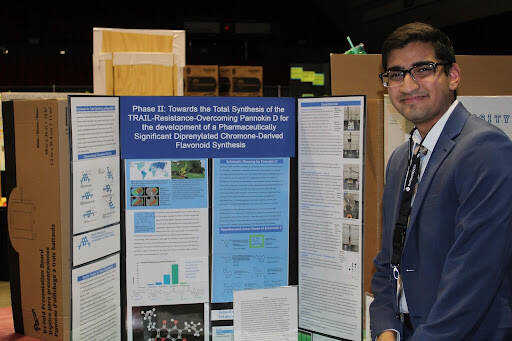 Parekh’s research began his sophomore year when he experimented in SEMO chemistry professor James Champine’s lab to “evaluate the contrast between the antimicrobial effectiveness of natural and synthetic antibiotics.” Through his research, Parekh became interested in synthetic antibiotics and pharmaceutical development.

Parekh’s research involves developing a total synthesis for an anti-cancer molecule, called Pannokin D. In a laboratory setting, Parekh is experimenting with a species of trees that produce breadfruit typically found in Southeast Asia. Parekh is using simple, commercially-available and affordable chemicals and push the breadfruit to produce a more complex molecule that will resemble his ultimate desired product.

While searching through the American Chemical Society’s database, Parekh said he read the Journal of Natural Products until he found an interesting molecule.

“I saw this Pannokin D molecule in the journal and then searched for this molecule in another database called SciFinder. In the database, it showed this molecule had never been prepared or synthesized before. I found out that this molecule had unique molecular components and is found in over 25 different classes of molecules,” Parekh said. “I wanted to develop a way to synthesize this molecule and its components. By developing a way to prepare Pannokin D in a laboratory setting, I'm simultaneously developing a way to prepare over 25 different classes of unexplored pharmaceuticals that can serve as treatment options for other diseases in addition to cancer.”

Parekh said resistance to synthetic antibiotics is called “tumor necrosis factor.” This resistance can cause difficulties in chemotherapy and treating cancer in certain cell lines. He is hoping to use Pannokin D to overcome this resistance to help treat stomach and other cancers.

Parekh’s research is ongoing, as he is utilizing more affordable and accessible material for his experiment. Parekh will be attending Yale University in the fall and plans to major in chemistry or biochemistry. He hopes to one day publish his research in the American Chemistry Society publications or other scholarly journals. 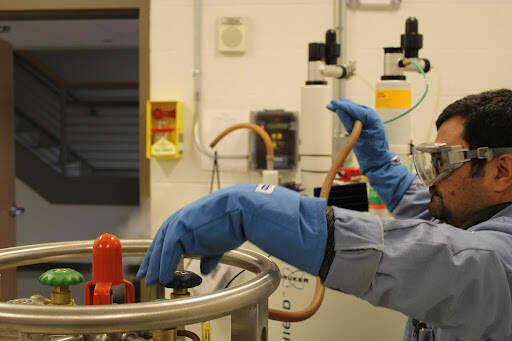 With the help of a SEMO professor, one local high school student is set to compete for the most prestigious science fair prize in the world.

Parekh is using SEMO’s Nuclear Magnetic Spectrometer (NMR), a $150,000 piece of equipment housed in Magill Hall of Science that once cost the department its entire budget when the previous one broke, according to Silwal. He said this could have been because someone brought a magnetized object within its small radius.

To prevent it from overheating, the NMR machine is refilled with liquid helium at -400 degrees F every semester, and every week with liquid nitrogen at -320 degrees F.

Normally, it’s used by chemistry students and professors as the strongest and final measure of a synthesis to identify molecules at the smallest level.

Parekh began the project to create Pannokin D in January 2021, and he could be developing it for the next few years. Pannokin D was discovered in 2014 from a jackfruit tree in Southeast Asia called artocarpus communis.

“It’s kind of pointless to discover a molecule and publish research about it if the molecule can’t be used for anything,” Parekh said.

Pannokin D has a unique molecular component that has only been found in nature. Parekh developed a new hypothesis to synthesize it more efficiently, which could make it simpler and cheaper than destroying the forests that house it.

Researchers found that Pannokin D was more potent against gastric cancer cells than any molecule discovered—gastric cancer being involved in 800,000 deaths a year.

Parekh found this out on his own: The same component can be found in more than 25 different classes of “unexplored, pharmaceutically-relevant natural products,” according to his research paper on the project.

He got the idea to study Pannokin D after a science fair project testing the antimicrobial efficiency between synthetic and natural molecules in culinary spices. He recognized the humanitarian potential in that.

“I was curious how to develop drugs and molecules that serve as treatment options,” Parekh said.

With this interest, he audited a couple of courses with Silwal, who used some of his research money to help fund Parekh’s project. Parekh said Silwal taught him how to use the NMR machine and perform techniques to separate particles in synthesis.

For the conference last year, Parekh completed the first stage, and this year sees his project in the middle of the second.

He hopes to finish the second part of his project by June or July, but it can be difficult to predict how successful synthesis will be.

To begin the delicate process, he mixed his starting chemical, a catalyst and solvent system for three hours at a high temperature. Then, he mixed it with cold water to end the reaction. The water layer was separated from the organic layer, which was divided again into its smallest components.

In the end, some of his product evaporated because he overheated his flask and didn’t have the condenser on a high enough setting.

“Total syntheses aren’t easy and are really time consuming,” he said. “It’s difficult to accomplish it on your first try without having to revise it … it really depends on human error.”

His work has not gone unnoticed by Saxony Lutheran High School principal Mark Ruark, who said school administrators don’t joke around about kids doing anything they set out to.

“They can be president. They can find a cure for cancer. But in my administrative career, I’ve got a kid who's working on just that,” Ruark said.

Along with two others, Parekh will train with the director of the Southeast Regional Science Fair for ISEF in Atlanta this month, where he will compete for cash prizes and the attention of talent scouts from high prestige universities.