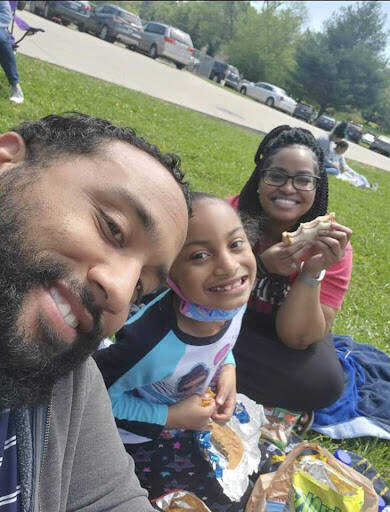 Will Atkins enjoying his day with his wife and daughter.
Photo submitted by WyKeshia Atkins.

According to resilienteducator.com, only 27% of first-generation students graduate within four years.

First-generation college students often drop out by 33% due to the barriers they face that many continuing-generation students don’t, according to Evan360.net.

Despite these obstacles, there are many Black first-generation alumni who have achieved success after graduating from Southeast.

Southeast alumnus Will Atkins, class of 2010, is one of these alumni. He is currently working as a training and development manager in Human Resources on SEMO’s campus. He is a Title IX investigator who processes all allegations of sex discrimination and sexual harassment, and an adjunct professor in mass communication.

Atkins grew up in a traditional, two-parent household until he was around 11 years old, when he said things started to take a turn.

Atkins said his sister got involved in gang life in St. Louis, and at the same time, his father got injured at work. The injury led his father to abuse painkillers until he started to turn to street drugs and lost his job. 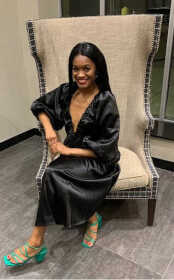 “My older sister also then got murdered, and we kind of went downhill from there,” Atkins said. “We were homeless on and off for about four years, and it was kind of hard for me to juggle school.”

Atkins said he started hanging around a bad crowd as he got older, which made him feel unclear about what he wanted to do in his future.

“That lasted until my sophomore year of high school, and my social studies teacher pulled me to the side one day after he had seen me being involved in a bad crowd, and he told me he saw more potential in me and told me to stop engaging in the activities that I was doing,” Atkins said. “I listened to him and started to go my own way, and I realized that I wanted more in life than what society was telling me I should have been striving for.”

Atkins' aunt played a big role in his success as she motivated him to further his education.

“My aunt worked for Washington University in St. Louis. She talked to me about education and gave me some ideas about college and helped me to figure out what I wanted to do, so I ended up coming to SEMO,” Atkins said.

He graduated from SEMO with his bachelor's degree in video production in May 2010.

“After that, I decided to go to grad school at Webster University, and I got my master’s degree in communications management, and that actually opened the door for a bunch of opportunities outside of video production,” Atkins said.

Atkins said he was a motivational speaker at a detention center for young men ages 18- 25 that had committed small crimes, which inspired him to look into teaching higher education.

“Luckily, I found a position at Southeast where I can train and use my gift of teaching with the staff and faculty. I can also be an adjunct professor, teach students and be a mentor for young Black men, because there [are] not many faces that they can approach that look like theirs that can allow access and instructions on things to do,” Atkins said. 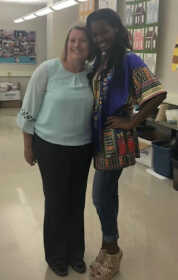 Jennifer Boyd with Theresa Taylor who is one of her favorite and most impactful teachers.
Photo submitted by Jennifer Boyd

Southeast alumna and first-generation college student Jennifer Boyd, class of 2021, also went through a few challenges while growing up. She said her mom was diagnosed with

lupus when she was two years old.

“She was also a single parent, so she wasn't able to work as much as other parents, so we were a low-income family,” Boyd said. “I wasn’t able to get the nicest clothes and the nicest shoes, which led to people asking why I was wearing this and why I was shopping at certain stores. That tore down my confidence and self-esteem.”

Despite these challenges, Boyd said she grew up in a supportive family that pushed her to be better than the day before.

“My uncles especially pushed me to be better and to do better than them, because they saw all the potential I had to be great. I have a pretty supportive family on my mom and dad’s side[s],” Boyd said.

Boyd said her former teacher Theresa Taylor inspired her to be the teacher she is today.

“She knew what I wanted and where I wanted to be, and she pushed me to be that, and I want to be that for my kids that I have now, my future kids and even kids I don’t have that are in third, fourth and fifth grade,” Boyd said. “I want to be that person that they know that they can go to and they feel comfortable with and someone that is going to push them to be better than what they were yesterday and today.”